Introduction
Blood transfusion rates in lower limb arthroplasty have fallen as a result of a number of improvements in the perioperative period. Enhanced recovery programmes (ERPs), use of tranexamic acid and multimodal blood management programmes have helped in reducing the requirement. However, despite these reductions large numbers of unnecessary blood tests and blood continues to be crossmatched. Blood is valuable and limited resource that is regularly in short supply and reliant on the donations of volunteers. In Ireland 3,000 blood donors are needed each week, however, only three percent of eligible Irish people donate blood to provide for a population of four million1. Enhanced recovery programmes were introduced in the 1990s and have now been adopted across a number of surgical specialties. They have reduced length of stay and costs and improved patient satisfaction and outcomes2-5. Tranexamic acid has been one of the major contributors to the reduced need for blood transfusion in lower limb arthroplasty. Numerous studies have shown it to be both safe and effective6,7.

As healthcare costs continue to rise, efficiencies and cost savings have now become an area of considerable focus. However, it is important that cost savings do not come at the expense of patient safety. Blood is a valuable resource but also a costly resource to collect, prepare and transfuse. The average total cost of transfusing one unit of blood is estimated to be 170 sterling to 1000 dollars including processing and staffing costs8,9. Most centres utilise a maximum surgical blood ordering schedule (MSBOS) that provides a recommendation on the number of units of blood that should be cross-matched preoperatively. With changes in practice this must be regularly updated. The aim of our study was to quantify blood transfusion rates in lower limb arthroplasty following the introduction of an ERP. We then sought to update the maximum surgical blood ordering schedule (MSBOS) and assess the savings achieved.

Methods
A retrospective cohort study was conducted of all patients who required blood transfusion following primary and revision Total Hip Arthroplasty (THA) and Total Knee Arthroplasty (TKA) in our institution in 2012 and 2015. An ERP was introduced in a phased basis during 2013 and 2014, so comparison was made between 2012 (pre-ERP) and 2015 (post ERP). Procedures were performed in a dedicated orthopaedic hospital located 17 kilometres from the tertiary referral centre for the region where blood transfusion services are provided. Data was collected and cross referenced from the hospital blood transfusion database, patient medical records and laboratory databases. Baseline demographic information, pre-operative and pre transfusion haemoglobin values, type of anaesthesia, use of tranexamic acid, length of surgery, blood loss, intraoperative transfusion, perioperative transfusion defined as transfusion occurring within 6 hours of surgery, time from surgery to transfusion and number of units of red cell concentrate transfused were recorded. Statistical analysis was performed using SPSS 20.

A multimodal enhanced recovery programme was applied for all procedures in 2015. This involved preoperative assessment, intravenous administration preoperatively of tranexamic acid and cefuroxime, use of spinal anaesthesia where possible and post-operative anticoagulation with prophylactic enoxaparin for 48 hours followed by rivaroxaban. Patients were mobilised as soon as possible following surgery. TKA was performed with the use of a tourniquet. Drains were not used. A GXM was taken on the morning of the procedure. For primary arthroplasty one to two units of blood were cross-matched (two units if the preoperative haemoglobin was <12g/dL) while for revision arthroplasty four units of blood were cross-matched regardless of preoperative haemoglobin [Table 1]. The haemoglobin level was routinely measured on post-operative day two. In certain cases, if blood loss was thought to be high it was taken earlier. The decision to transfuse was made by the primary surgical team. Blood transfusion was administered according to hospital guidelines if the haemoglobin level was <8 g/dL and <10 g/dL to patients with cardiovascular disease.

After consultation with the blood transfusion laboratory and haematology department the MSBOS was updated in 2016 [Table 1] and introduced in October 2016. The cost of performing one group and crossmatch (€75.00) was provided by the Blood transfusion laboratory. Using the number of procedures performed in 2015 the maximum possible number of cross-matched units of blood was calculated for the previous MSBOS and updated MSBOS. The potential saving per annum was then calculated. 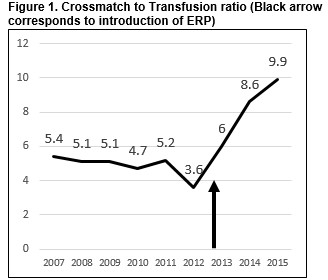 Discussion
Blood transfusion is associated with considerable costs as a result of the numerous resources and personnel involved. As shown in other studies review of blood transfusion practices and updating the MSBOS can result in significant reductions in the number of cross-matched blood10,11. More than €54,000 per annum was saved in our study as a result of the reduction in cross-matched blood. The ratio of cross-matched to transfused blood (CT ratio) provides a simple tool to measure the efficiency of this system. In 2015 our CT ratio had risen to 9.9:1, considerably higher than that in 2012 of 3.6:1. While this is far higher than the recommended 2-3:112. These figures may be partially explained by the fact that no blood transfusion service exists on site in our institution. Despite this disproportionate cross-matching of blood was still occurring which we hope has now been addressed by the updated MSBOS.

Large numbers of studies have now been published highlighting the effectiveness and safety of tranexamic acid in reducing the need for blood transfusion in total hip and knee arthroplasty13. Introduction of tranexamic acid in our institution has helped reduce the requirement for transfusion however it is not the sole reason but likely one of the parts in a multimodal ERP. One of the incidental findings of our study found that in 2015 only 65% of patients that underwent transfusion had received tranexamic acid. This has since been addressed with the inclusion of the question “Has tranexamic acid been given?” to the surgical safety checklist. With this we hope that a future audit will show 100% compliance.

While the majority of hospitals perform a preoperative group and save in lower limb arthroplasty some, including our institution continue to routinely crossmatch blood. Some studies are now beginning to question the need for a preoperative group and save14,15. A recent retrospective study of 996 patients over a one-year period undergoing lower limb arthroplasty using a multimodal ERP reported that just one patient required blood on the day of surgery14. While the number of intraoperative transfusions given has fallen in our study (26 to 7), there is still a need for blood urgently. Studies have suggested the use of O negative blood in emergency situations where cross-matched blood is not immediately available14-16. However, even with O negative blood there is still a small risk of a transfusion reaction if the patient has atypical red cell antibodies. It is also a scarce resource found in only 6-8 % of the population17. It is important that the quest to reduce costs does not come at the expense of patient safety.

Our study is not without limitations. This study was retrospective in nature thus reliant on the records that exist. Also variations in application of the ERP exist among both surgical and anaesthetic clinicians. Our figure of cost savings is likely an underrepresentation of the actual costs as transport, administration and staffing costs were not included.

Blood transfusion requirements in lower limb arthroplasty have dropped following the introduction of a number of new perioperative measures and blood management practices. It is important that centres now review and update their blood transfusion policies to reduce the burden on the strained blood transfusion service as well as reducing costs.