Should the HPAT exam continue to be used as a means of evaluating medical students?

Since its introduction in 2009, the HPAT has courted controversy. With the media and medical professionals questioning its effectiveness1, its position is constantly being re-examined. I aim to explore the merits of the HPAT in evaluating medical students.

The first year the HPAT was introduced 33% of students would not have been accepted to medical school without it2. Clearly, a different type of student is being admitted than those selected solely based on academics. What specific quality does this student have that the HPAT singles out, and is this relevant to medical practice? Defining what this is, of course, is very difficult.

We must start by examining the purpose of the HPAT. According to the HPAT manual,  it doesn’t assess academic knowledge but logical reasoning and problem solving (Sections 1 and 3) as well as interpersonal understanding (section 2). It also aims to test the “general skills and personal abilities” that are important to be a competent medical professional3. These skills and abilities are not clearly defined.

In the literature, the HPAT was “supported in principle” by the majority of stakeholders1. Sections 1 and 2 were thought to be clinically related but the relevance of Section 3 to medical practice was repeatedly questioned and deemed to be less fair in judging entry to medical school1, 4. Being but a humble student, I would be disinclined to advocate for the removal of something supported by the medical community at large. Section 3, however, does not appear to be supported or judged to be clinically relevant by a wide variety of medical professionals and this bears further discussion. 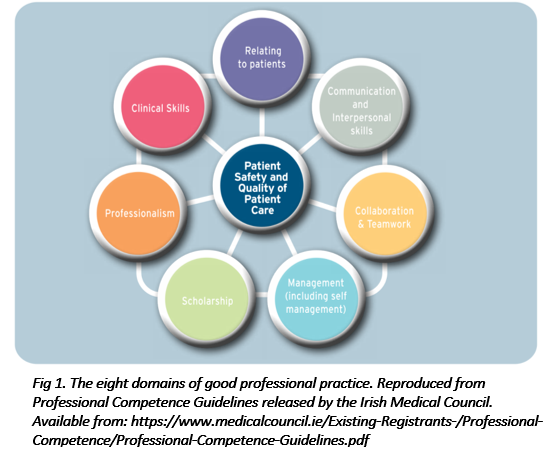 The Irish Medical Council lists eight components of professional competence (Fig 1), the entity that the HPAT purportedly assesses. Scholarship could be said to be assessed by the leaving certificate. Excluding this, and assuming all the components feed into patient safety and quality of patient care in the centre of the diagram, it could be said that section 2 assesses the ability to relate to patients as well as communication and interpersonal skills. As we have seen, many doctors doubt the clinical relevance of Section 3. For the sake of argument, let's assume that Section 1 serves loosely to assess clinical skills. This leaves three components of professional competence unaddressed. With an interview integrated model we could potentially assess the other three components, as well as those covered by Section 2. We could in theory examine all areas of professional competence and potentially admit applicants more likely to be better doctors and contribute to a higher quality of patient care.

The idea of interviews determining eligibility for medical school isn’t a new concept. It's a central part of the selection process in Britain, the US and Australia (from where the HPAT is derived). Work experience in health-care is encouraged and looked upon favourably in interviews. A key question at interview is “Why do you want to become a doctor?”

From an anecdotal perspective, there exists a culture in Ireland in going into medicine for the wrong reasons, i.e. parental pressures, the idea of it being a prestigious career and choosing the course with the highest points on the CAO. The HPAT seems to have reduced the emphasis on academic achievement and in that it has accomplished its objective of establishing a two-tiered entry model to medicine1. Now we need to move further.  In a certain study, the introduction of interviews was supported by 74% of medical students admitted through the HPAT system5. I believe we need to assess an individual's drive to study medicine and their interpersonal skills at an interview level, rather than through an impersonal and possibly flawed aptitude test.

We follow an evidence-based approach in all areas of medicine and we look to world leaders in the US and Britain for guidelines of best practice. It seems bizarre that we shouldn't follow their lead in how we admit students to medical school when this selection process has a trickle-down effect on all facets of medical life.

We have embarked correctly down the path of attempting to select individuals not solely on the basis of their academic achievement. While we have made progress in this, there is a long way to go in order to match international standards. I propose the abolishment of section 3 of the HPAT and the setting up of an interview process with each university by clinician educators in order to grant individuals entry to medical school in Ireland.