Introduction
Solitary plasmacytoma (SP) is a rare malignant tumour characterised by a localised collection of neoplastic plasma cells. SP is closely related to multiple myeloma (MM) which, in contrast, is characterised by widespread plasma cell neoplasia with systemic features including hypercalcaemia, bone disease, anaemia and/or renal impairment. SPs can manifest as a solitary bone plasmacytoma (SBP) or less commonly as a soft tissue mass i.e. solitary extramedullary plasmacytoma (SEP). SP is far less common than MM (~5% of plasma cell malignancies) and therefore there is a lack of high-quality data guiding management1. Like MM, SP is more common in males but has a lower median age of onset. SBP most commonly affects the axial skeleton 1,2, particularly the vertebrae, with SBP accounting for ~30% of malignant spinal bone tumours1. Less common sites of SBP include the ribs, clavicle and scapulae2. SEP (ratio approximately 10:1) are much less common than SBP1,3 and are most frequently seen in the upper respiratory tract and less commonly in the lower respiratory tract, gastrointestinal tract and rarely in sites such as breast and pituitary gland3. Five year overall survival(OS) following a diagnosis of SP is variable with reported  ranges of 40-85%4.

Diagnostic criteria for SP (published by the International Myeloma Working Group, IMWG) indicate that the lesion must be solitary in nature without clinical, radiographical or biochemical evidence of systemic MM. Recent guidelines recommend MRI or PET/CT evaluation ,in addition to standard x-ray skeletal survey, to exclude multifocal disease5. The presence of a monoclonal protein (M-protein) varies, but if present, is generally found at levels below those typically seen in MM2. SP is characterised by a significant risk of progressive to MM over time with approximately 50% of patients with SBP MM within 2-4 years of diagnosis1. SEP confers a better prognosis with lower recurrence rates1. Some studies report that higher levels of M-protein, immunoparesis and persistence of M-protein post-radiotherapy are associated with an increased risk of progression to MM5,6,7. In addition, bone marrow (BM) infiltration by clonal plasma cells is associated with inferior progression free survival (PFS) when compared with those without BM involvement5. Other studies have identified larger tumour size8 as a risk factor for progression to MM whilst the finding of high levels of angiogenesis in plasmacytoma specimens may also predict a more aggressive course9.

Given the rarity of SP there is a lack of prospective clinical trial data on which to base treatment decisions. Radical radiotherapy has formed the backbone of SP treatment for many years with current guidelines recommending it’s use as a frontline treatment1. There has been much debate on the existence of a dose-response relationship1,10 with current guidelines suggesting that a higher dose of radiotherapy (up to 50Gy) should be considered in both SBP and EMP >5cm1. Recently published data from analysis of the characteristics of 5056 patients with SP also shows that treatment with a radiation dose of <40 Gy4is associated with a worse OS.

Surgery may be considered in SBP where there is structural instability or neurological deficit1 but is not recommended in SEP as these tumours are generally highly radiosensitive. Adjuvant chemotherapy is not currently a standard therapy for the bulk of SP cases with conflicting reports published on it’s efficacy. Owing to the rarity of SP, and the resultant lack of any published data from the Irish Hospital setting regarding the treatment and outcomes for SP patients, we chose to audit our recent practice regarding the investigation and management of SP.

Method and Results
We retrospectively audited the demographics and treatment outcomes of SP patients (n=17) in our institution over a 17 year period.  Our findings showed a cohort of patients with a median age of 48 years (range 27-73) at diagnosis which is slightly below the median age of other studies, but in keeping with a younger age of diagnosis than MM3. There was an unequal gender distribution with a male: female ratio of 8.5:1 (Fig.1A). Of 17 cases of SP, three patients were found to have extramedullary tumours which were  located in the  posterior pharyngeal wall, posterior nasal space and in the extradural space. Of the remaining 14 SBP, 11 were located in the axial skeleton, (Fig.1B) and the residual 2 tumours were observed in the appendicular bones (Fig.1C). All patients had serum protein electrophoresis (SPEP) testing with an M-protein identified in 11 cases- the highest concentration was recorded at 14.4 g/dL (of note, this patient has not progressed to MM to date). Urine protein electrophoresis testing was carried out in 10 patients with a urine M protein isolated in 5 cases.  Overall, only 4 patients had a combined serum and urine M-protein detected. All patients underwent bone marrow biopsy with a minimal plasma cell (PC) infiltrate (5-10% PC) found in 8/17 patients, identified by CD138 staining. Of these patients, 3 progressed to MM in comparison to  2 in the cohort that did not have raised plasma cells on bone marrow examination at diagnosis (n=9). 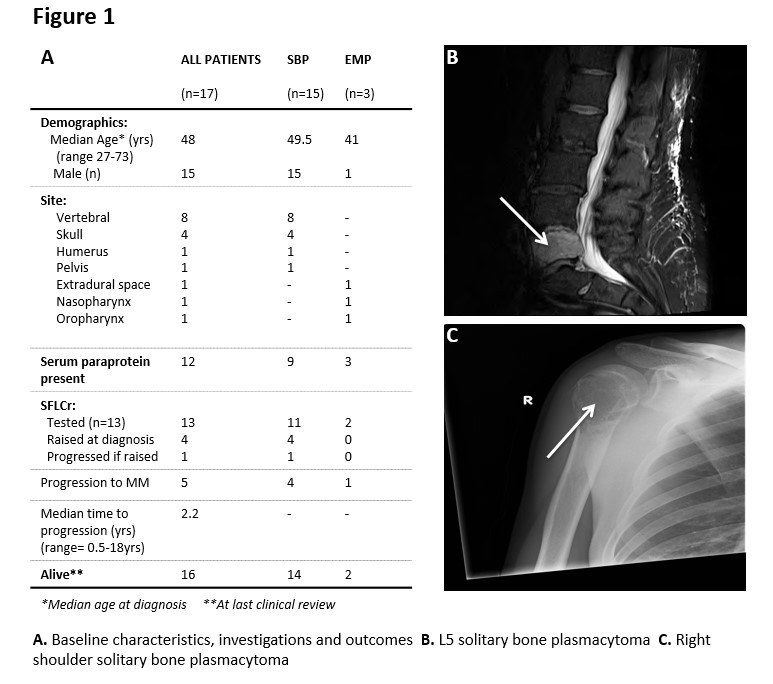 The introduction of  serum free light chain ratio (SFLCr) testing has improved monitoring of cancers with small plasma cell clones such as AL Amyloidosis or SP. It detects an increase in either kappa or lambda light chains and is a sensitive method for detecting plasma cell burden. Studies report an abnormal SFLCr as an independent risk factor for progressive disease in monoclonal gammopathy of undetermined significance (MGUS)11. Several groups have sought to establish its prognostic value in SP with some reporting a higher rate of progression with an abnormal SFLCr 12. The SFLCr was included as a recommendation in the SP British Committee for Standards in Haematology Guidelines in 2009 and therefore all patients from 2010 onwards in our study had a SFLCr recorded as well as 5 patients before that. The median SFLCr was 1.46 (range 0.75-6.16), with 4 patients (24%) exhibiting an abnormal ratio. This is lower than the 47% reported in larger studies which have shown that abnormal SFLCr are linked with an increased risk of progression to myeloma as well as an adverse overall survival12. Of note, only 1 patient with a raised SFLCr at diagnosis has progressed to MM thus far.

During our follow up period (1989-2017), 5 cases in total progressed to MM. The median time to progression was 26.4 months. Of those that progressed, 4 patients had an original diagnosis of SBP located in the vertebral spine and the remaining patient had an EP located in the extradural region. Upon progression, all patients (n=5) received systemic chemotherapy and 2 have undergone autologous stem cell transplantation thus far. Four patients who progressed are alive, with only one death to date due to disease progression. All those who did not progress were alive at last clinical review.

Discussion
Here we present a retrospective audit of treatment and outcomes in SP which, to the best of our knowledge, is the first reported experience of SP in an Irish context  to date. Goyal et al have recently published an analysis of the largest number of SP cases studied to date, by reviewing 5056 plasmacytoma cases recorded in the US National Cancer database between 2000 and 2011 and found a median OS of 132 months for SEP and 85 months for SBP4. They also found that 69.8% of SP were SBP whilst the second most common SP site was the aerodigestive tract at 13.5 %. Our data is in keeping with these findings with 14/17 SBP and 2/17 SEP located in the upper airways. Similar findings were reported in another large series following a review of the US Surveillance, Epidemiology and End User (SEER) database between 1998 and 2007 that identified 1691 SP cases3. These authors  noted a male predominance (ratio 1.7:1) with SBP accounting for almost 60% of all cases. Despite the favourable outcomes reported for SP patients in these studies, a significant number of SP patients will progress to MM. Recent studies have sought ways to identify patients at high risk for progression to MM and multi-parameter flow-cytometry on BM samples at the time of SP diagnosis has been shown in 2 studies to identify higher-risk patients suggesting that these patients might be considered for adjuvant therapy in addition to radiation13.

In summary, we found that the disease characteristics, clinical presentation and outcomes of our SP patients closely mirrored those documented in larger cases series. In addition, radiotherapy  was the mainstay of our treatment  which is fully in line with recently published consensus guidelines on SP management. Importantly, a significant proportion of SP patients still progress to MM despite aggressive treatment  hopefully ongoing studies will identify biomarkers to help  tailor more effective therapies for this high risk group.