Abstract
Parenteral Nutrition may be prescribed as a standard PN (SPN) formulation or as an individualised PN (IPN) formulation. SPN may have advantages in terms of rapid availability, less prescription errors, decreased risk of infection and cost savings but IPN, specifically tailored to an infant’s needs, may achieve better outcomes in terms of nutrient intake and weight gain. The aim of our study was to determine if VLBW infants in our NICU benefited from receiving IPN over currently available SPN solutions. Our findings were that VLBW infants prescribed IPN received significantly more amino acid (28%), glucose (6%), energy (11%) and calcium (8%) from the aqueous phase of PN than had they received a similar volume of SPN. The benefits were seen over all the days for which PN was administered. In conclusion, IPN was found to offer significant benefits to our VLBW infants. Modifications to currently available SPN would result in better SPN formulations. Our study also supported the recent recommendation to reduce the calcium:phosphate ratio in PN solutions to avoid early hypophosphataemia.

Introduction
Parenteral nutrition (PN) is an integral part of the management of very low birth weight (VLBW) infants1. It may be prescribed as standard PN (SPN) catering for the average needs of a large group of patients. Alternatively, it may be provided as individualised PN (IPN) adapted to the patient’s needs. SPN has advantages in terms of rapid availability, less prescription errors, decreased risk of infection and cost savings2-4.However, the need for growth, combined with the rapidly changing physiology during the first few days of life, means that IPN may result in better nutrient intake, biochemical control, and weight gain5. In the Republic of Ireland (ROI), one commercial company was awarded the contract to supply all neonatal PN for the country (SPN and IPN). There are three SPN formulations agreed for neonatal use. Details of the composition of these formulations are outlined in Table 1 and are compared to SPN formulations recently published by the Australasian Neonatal Parenteral Nutrition Consensus Group4. The aim of our study was to see if VLBW infants in our NICU benefited from receiving IPN over SPN.

Methods
The National Maternity Hospital prescribes approximately 1,500 bags of PN each year (65-70% IPN). PN is ordered on a daily basis, with input from a neonatal dietitian and pharmacist. A computer based prescribing programme is used and written unit-based guidelines are available. Over a 5-month period (from 1/6/13 to 30/11/13), IPN prescriptions on all infants ≤31wks and/or ≤1500g were reviewed. During the study period, SPN (starter PN: sodium free) was commenced on all infants ≤30 wks and/or ≤1250g on admission (see Table 1). A separate lipid infusion was commenced within 24 hours of birth (SMOFLipid 1g/kg/day).Total fluids were limited to 60mls/kg/day and increased as determined by serum electrolytes, urinary output and weight. The day following admission, PN was recommended for all other infants ≤31 wks and/or ≤1500g unless the infant was to reach full enteral feeds by day 3-5. IPN was prescribed in preference to SPN. The composition of each IPN prescription was compared to SPN appropriate for use on the day in question. As IPN was generally ordered on day 2, IPN was compared to SPN (preterm PN: with electrolytes) (see Table 1). The nutrient or energy gain/loss from the aqueous phase of PN was calculated as follows:

The statistical method applied was a linear mixed model with random subject effect to take account of the correlation of serial PN composition over time for each infant (with a highly variable number of days on PN for each infant). The p-values provided were a test of whether the intercept (grand mean of the nutrient/energy gain) was equal to 0% (i.e. no gain). A significant p-value (<0.05) was taken to represent that the infant received significantly more or less nutrient or energy than could be provided by SPN.

Thirty-six infants ≤31 wks and/or ≤1500g received 320 IPN prescriptions. Mean gestational age was 28.1+/- 2.0 wks (range 24-31wks). Mean birthweight was 1122 +/- 284g (range 650-1960g). Average number of days on IPN was 8.9 +/- 5.0 days (range 2-19 days). The percentage difference in nutrient and energy intake is outlined in Table 2. Preterm infants prescribed IPN were provided with significantly more amino acid (AA) (28%), glucose (6%), energy (11%) and calcium (8%). Significant gains in these four parameters were seen for IPN orders placed during the first 7 days of life. After 7 days of life, the gain in terms of calcium was lost but IPN provided significantly more phosphate (16%). Figures 1 and 2 show this information graphically. Each infant is represented by a grey line with a grey dot indicating the net gain/loss for AA and for energy of IPN over SPN for each day of PN. The horizontal line indicates 0% benefit of IPN over SPN. The curve (thick black line) indicates the overall average net gain/loss for all infants receiving IPN over SPN and the shaded grey area is the confidence band. 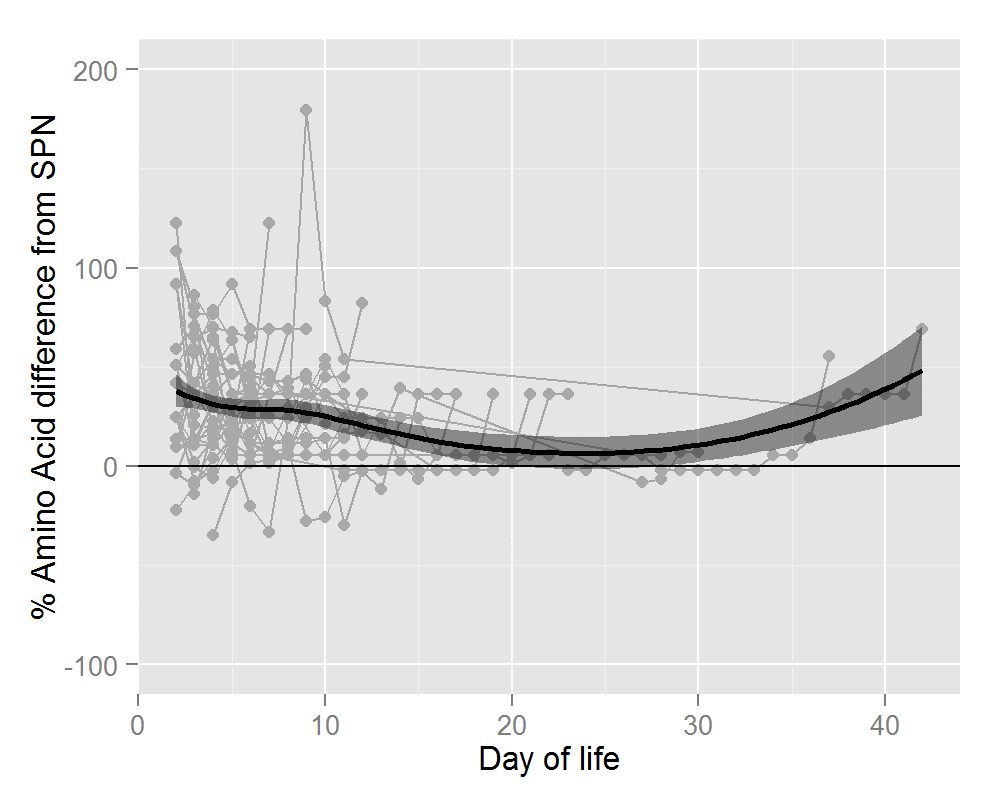 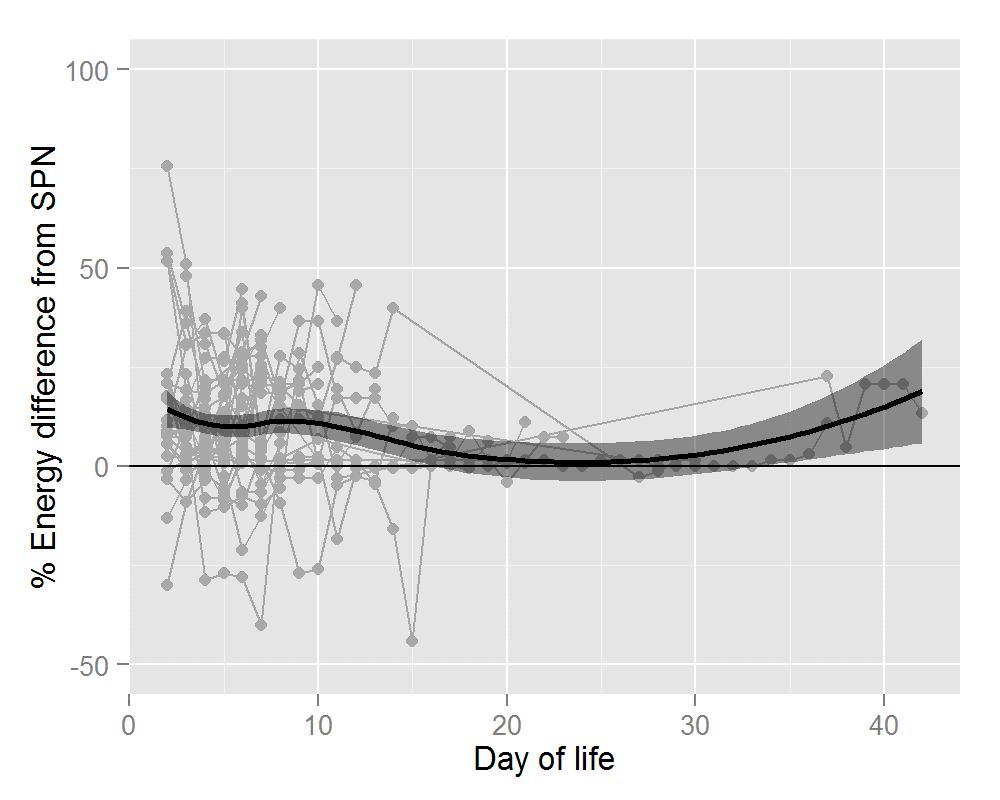 Discussion
Our study shows that IPN provides significantly more AA, glucose, energy and calcium to VLBW infants than if they receive a similar volume of SPN. While the benefit tapered off in terms of calcium after 7 days, IPN provided significantly more phosphate at this time. The relative clinical merits of SPN as opposed to IPN have been very little studied. While recent European guidelines for PN assert that "the uncritical use of standard formulations particularly over a longer period of time may be detrimental to growth and development”, there are no good randomised trials to support this statement1. Recent literature would suggest that with better attention to SPN formulations, the number of preterm infants that could be managed on these formulations could be increased6-8. Three studies involving neonates reported benefits in IPN over SPN. The first, a randomised controlled trial of 28 infants (mean GA 31 wks) reported better intakes of energy, AA and lipids with improved weight gain (11.8 g/day vs. 4.9 g/day) in infants receiving IPN9. Mutchie et al. reported on 12 infants (mean GA 35 wks)10. IPN resulted in better growth (17 g/day vs. 4g/day) and cost less than SPN because of decreased wastage. Both studies were conducted over 25 years ago when SPN formulations were less optimal. In 2010, Smolkin et al. reported that IPN was associated with greater weight gain during the first month of life, greater discharge weight, shorter duration of PN and more electrolyte stability11. A weakness of the study was an interval of six years between the two study periods with the possibility of change in clinical care over time contributing to the outcome.

Other studies report more favourable outcomes for SPN. Devlieger et al reported on 30 neonates (BW <1500g) receiving SPN. Weight gain corresponding to intrauterine weight accretion was achieved and SPN had advantages in terms of safety, availability and lower production costs12. Lenclen et al found that SPN provided higher early intakes of AAs and glucose and a better calcium:phosphate ratio in infants <32 wks13. The improvement in nutrient intakes was because of less deviation from protocols and earlier commencement of PN. Yeung et al in their study of 58 neonates (<33 wks) found that the use of two SPN formulations provided 42% more amino acid in the first week of life and higher calcium and phosphate intakes by 25%14. IPN did not result in better biochemical control. Similar findings in infants <33wks receiving SPN was reported by Iacobelli et al15. Our study is important as it compares IPN (as prescribed by a multidisciplinary nutrition team) with a relatively “new” SPN formulation. As relatively small differences in nutrient intake over the early days of life may have significant impacts on short and long term outcomes, the significance of these findings should not be underestimated16-19. While SPN has a role, including allowing PN to begin immediately after birth, our study highlights the importance of regularly auditing SPN to see if modifications are warranted. Increasing the AA concentration in SPN to 3.0g/100ml would be a first step in the right direction. Cormack et al. use a PN solution with 4.7 g AA per 100mls so that consensus-recommended AA intakes can be achieved20.

The Republic of Ireland is unique in that one commercial company was granted the contract to produce and supply all neonatal PN for the country. No neonatal unit within the country has the facilities in-house to produce or modify PN solutions and so are currently completely reliant on a commercial enterprise for their PN supply. The national contract is now due for renewal. From the clinicians’ perspective, this is a unique opportunity to review the situation nationally. With minor modifications to currently available SPN solutions, such as those mentioned above, it would be possible to increase the number of preterm infants that could be managed on SPN solutions alone. However, as also noted in our study, there will always be a need for IPN on a daily basis for a selected population of critically ill neonates. Another interesting finding in our study relates to calcium and phosphate. Commencing PN on Day 1 with >2.5 g/kg/day of AA and at least 40 kcal/kg/day of energy is now widely accepted21. However, a high AA supply in the presence of calcium without adequate phosphate can induce hypophosphataemia22. The international recommendation is that PN solutions should have a calcium:phosphate ratio of 1.3-1.7:1.023. To guarantee stability, our preterm SPN solution has a calcium:phosphate ratio of 0.8:1.0. In our study, while IPN provided significantly more calcium, no benefit was seen in terms of phosphate. We hypothesise that this is because the SPN formulation contains greater than usual levels of phosphate. Rigo and Senterre have recently suggested that the calcium:phosphate ratio should be reduced to a value close to or slightly lower than 1:1 to avoid this earlyhypophosphataemia22. Our study would support this recommendation.

Our study is not without limitations. As our study was purely observational, no assessment of other advantages/disadvantages of IPN were addressed i.e. PN bags “wasted”, prescription errors etc. Our study also did not take into account the volume of enteral feed received. As enteral feeds are increased, PN volume is proportionally reduced. IPN takes this into account by concentrating nutrients in smaller volumes but the extent of the benefit over SPN is mitigated as enteral feeds are advanced. While SPN solutions have a role to play, currently available SPN formulations are not optimal. IPN, as prescribed in our NICU, still offered significant benefits. The evidence supporting a PN process that only involves the use of SPN producing equivalent outcomes to IPN is still lacking.