Herein, we describe a case of 69 year old man who presented with gradual bilateral hearing impairment and unsteadiness. Examination showed bilateral sensorineural deafness and cerebellar ataxia. Neuroimaging revealed a rim of hypointensity surrounding the brain stem, superficial cerebellar fissures and extending into the cervical spinal cord consistent with the diagnosis of superficial siderosis (SS). Investigations failed to identify any reversible cause for the condition.

SS is a rare neurodegenerative disorder caused by chronic subarachnoid haemorrhage. Clinically, the cardinal features are progressive sensorineural deafness and cerebellar ataxia. Brain magnetic resonance imaging has made antemortem diagnosis of this condition feasible. Imaging of the entire neuraxis should be done to identify any treatable cause. 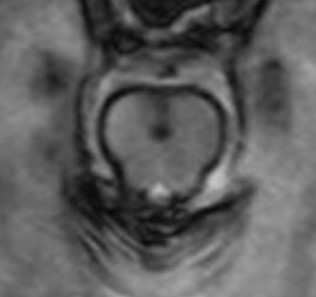 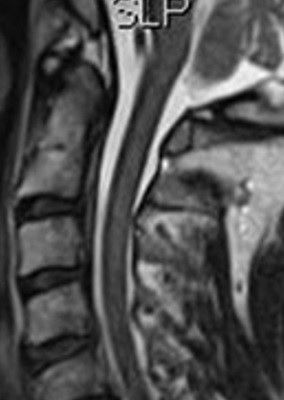 SS is a neurodegenerative disorder caused by chronic haemorrhage within the subarachnoid space leading to deposition of hemosiderin in subpial layers of the brainstem, cerebellum and spinal cord. The cardinal features of SS of the CNS are deafness and cerebellar ataxia, and these occur in approximately 90% of cases1. Less common manifestations include myelopathy, bladder disturbance, anosmia and dementia. Although uncommon, other cranial nerves involvement have also been reported in SS, including optic nerve, trigeminal nerve and extraocular nerve palsies. Predisposing factors include prior history of head trauma, intradural surgery, cerebral amyloid angiopathy, CNS tumours, brachial plexus injury and other causes of subarachnoid haemorrhage. The aetiology is not identified in up to 35% of cases2. The condition has a predilection for the cerebellum and the eight cranial nerve. This may be explained to some extent by blood pooling in the posterior fossa. In addition, the eight nerve has a long glial segment that predisposes it to iron deposition and hence axonal injury3. Finally, the presence of Bergmann glial cells in the cerebellum that display increased ferritin synthesis makes it preferentially affected4.

Imaging of the entire neuraxis should be done to out rule an underlying dural defects, neoplasia or arteriovenous malformations which may be amenable to surgery5. Removing the source of the bleeding may halt further disease progression but doesn’t reverse the clinical manifestations of the disorder. Few reports have shown resolution of the subarachnoid bleeding by analysing the cerebrospinal fluid post-operatively. However, it was difficult to assess the clinical outcomes in view of the slow progression of the disease. There is no effective treatment to date and previous attempts of iron chelation were unsuccessful.