Background
The use of smartphones in health care settings has become widespread. Although there are several benefits of smartphone usage for anaesthetists, there is a potential for negative effects on their performance and hence on patients’ care.
Objectives:
To investigate the ownership and patterns of anaesthetists’ usage of smartphones and to identify the concerns and opinions about the potentially harmful effects of their use.
Methods
We emailed an online survey to all anaesthetists working in the Saolta university healthcare group.
Results
A high proportion of anaesthetists owned 1-5 medical-related applications (61.1%). Drug and medical references was the most commonly used category of applications
Discussion:
There is an increasing number of useful medical-related apps with a potential for improving performance and new developments. The low level of awareness to smartphone use policies indicates the need for increasing awareness and developing guidelines that encourage the safe use of smartphones.

Introduction
Recent centuries have witnessed a revolution in technology which has made significant contributions to improve the quality of many aspects of our lives, including healthcare systems. Among these rapidly advancing technologies, smartphones stand out as an example of valuable devices that have dramatically changed the healthcare domain and the clinical practice.

There is substantial evidence of the role of smartphones and medical applications in the daily practice of healthcare professionals. In one market research, it was estimated that 72% of US physicians use smartphones, and this number was expected to rise to 81% by 20121. This increasing popularity of smartphones can be attributed to the numerous benefits associated with their use. For instance, they can provide immediate access to a wealth of medical and health information via internet, emails and instant messages. Furthermore, they can lead to improved communications between healthcare professionals, and hence improved patient care2. An essential feature of smartphones is the integrated software applications (apps). These apps can either be preinstalled on the device or can be web apps that are accessed and downloaded via the internet. It is estimated that over 300,000 apps were developed between 2007 and 20103, and developers categorise a subset of these applications as medical apps. The utilisation of these medical apps by health care personnel, including anaesthetists has evolved recently.

A national UK survey showed that 80% of anaesthetists are using medical and health-related apps4. Although previous research has examined the patterns of smartphone and medical-related apps use by health care professionals5,6, the literature is limited with regard to the population of anaesthetist7.

Despite the several benefits of smartphone usage for anaesthetists, there is a potential for adverse effects on their performance, and hence on patients care if not used wisely8,9. The extent of this has not been thoroughly examined in the literature. As a result, we thought it would be relevant to conduct this study to investigate the smartphone use by anaesthetists. The aim was to determine the extent of ownership and different patterns of usage of smartphones among anaesthetists in terms of type, quantity and frequency of use of medial-related applications. We also aimed to identify the concerns and opinions about the potentially harmful effects of their use and to assess the awareness and attitude toward having policies at the workplace to control the use of smartphones.

Methods
In June 2016, a 14-question anonymous online survey was emailed using a recognised survey website (surveymonkey.com) to all anaesthetists (total number of 69) in the University Hospital Galway, and reminder emails were sent a week later. The emails contained a short description of the nature and purpose of the study as well as the link to the survey we created on Survey Monkey. We offered no honorarium for participation in the study. The same questionnaire was distributed to the anaesthetists who joined the department of anaesthesia in University Hospital Galway in July 2016 (total number of 29). In August 2016, the same online survey was forwarded to all anaesthetists (total number of 53) working in the  Saolta health care group including Sligo General Hospital, Letterkenny General Hospital, Mayo General Hospital and Portiuncula Hospital. We distributed the survey for the second time to generate more responses.

To develop the questionnaire design, the lead researcher first reviewed the literature and examined other surveys relevant to the use of smartphones by healthcare professionals. The initial draft was revised by the second investigator (a senior anaesthetist with expert opinion) who made suggestions to improve the clarity and understanding of the questions in the survey. The study was piloted first within the University Hospital Galway, then extended to other hospitals in the Saolta university healthcare group. The questionnaire collected data on demographics of participants, ownership and types of smartphones, numbers and categories of medical apps owned and their frequency of use, smartphone use during patients’ contact, opinions on smartphone safety and existing policies controlling their use. The data was collected anonymously and analysed using IBM SPSS v 23.0 software. All numerical data were analysed using descriptive statistics.

Smartphone ownership was prevalent (97.9%). The iPhone was owned by 62.1% of the anaesthetists, and 33.7% of the respondents used Android-operated smartphones. The majority of anaesthetists held 1-5 medical-related apps, with very few owned more than 15 applications (Figure 1). Table 1 gives details about the different types of medical-related apps used by anaesthetists and how often these apps were used; drug and medical references were the most commonly used category of apps with 84.2% of the respondents reported their use at least once per day. 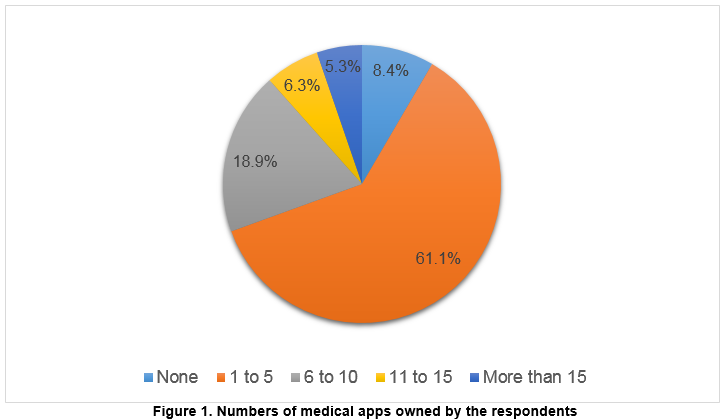 About two-thirds of the respondents (n=67/95) used smartphones during contact with patients. When asked about the reasons; 76.8% reported using smartphones for patient-related purposes, compared to only 37.9% for non-patient-related purposes. A significant number of respondents expressed concerns regarding the use of smartphones during clinical practice, both in terms of patient safety and anaesthetists’ performance (Table 2). When asked about the risk of distraction, 68.4% of the respondents had witnessed another anaesthetist being distracted by smartphones at least once (Figure 2). Despite this, only 17.9% agree to have restrictions on smartphone usage in the workplaces. The majority of the anaesthetists (81.1%, n=77/95) had no knowledge about existing policies concerning the use of smartphones in workplaces. 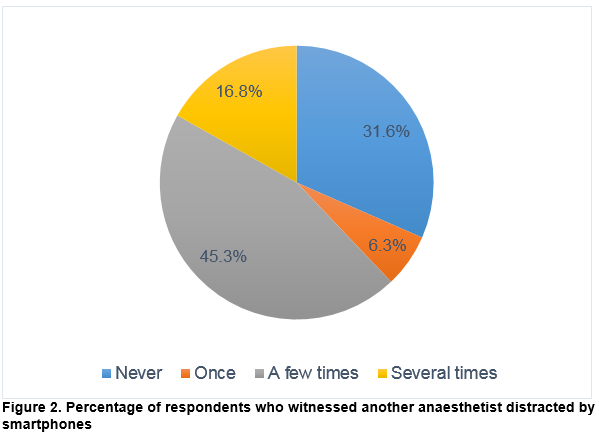 We received 33 open-ended responses from participants, a common theme from consultants’ comments was the concern about distraction to trainees by smartphones, mainly when used in operating rooms, “Phones should not be used in the theatre except for on-call business”. Among NCHD, the importance of smartphones in emergencies and to seek immediate help and information was a common theme.

Discussion
Mobile devices and medical-related apps provide benefits for healthcare professionals, as well as their patients. Smartphones have many capabilities that make them a valuable tool in the healthcare environment. They can facilitate an efficient and rapid communication between healthcare providers; this can be achieved by different means including voice and video calls, text and multimedia messages and e-mails10,11. Other useful benefits include their ability to improve clinical decision-making, provide rapid access to evidence–based medicine and to assist in medical education and training10. The use of smartphones for remote patient monitoring and relieving anxiety during inhalation induction in paediatric anaesthesia are examples of innovative developments of most significant interest to anaesthetists.

The substantial ownership and utilisation of smartphones by anaesthetists found in our survey match the results of previous research4, and this can be explained by the increasing availability and quality of medical and health-related applications. The majority of respondents reported having between one to five medical-related apps which they use on a regular basis; this may be because anaesthetists are selective about the medical apps they download and use. Similar to previous studies, drug/medical references and literature review/research types of apps are the most frequently used apps. This reflects the circumstances in which smartphones are used, as our data showed that 70.5% of anaesthetists use smartphones during their contact with patients; these types of apps are most useful when used at the point of care.

Despite their multiple benefits, smartphones can present a potential source of distraction and interruption of clinical care, which can lead to serious harm to patients. There is extensive data about the negative effects of using phones while operating motor vehicles. Drivers who use mobile phones are four times more likely to get into a road traffic accident12. A comparison can be made between providing anaesthetic care in operating rooms and driving a vehicle, with similar likelihood of distraction and severe consequences. When compared with reading books or journals in operating rooms, smartphones can be more distracting, as they can involve interactions with other people, especially if used for messaging or social media. A study by Slagle et al. demonstrated that reading during anaesthesia care did not affect the vigilance of anaesthesia providers13. It is unclear whether these results can be mirrored when it comes to the use of smartphones.

Our findings revealed an adequate level of awareness about these negative effects of smartphones, as 68.4% of respondents believe that using smartphones can have deleterious effects on anaesthetists’ attention and performance. The paucity of the literature makes it very difficult to ascertain the magnitude of the distraction that can result from the use of smartphones in operating theatres. A survey similar to ours has shown that 41.5% of anaesthesia providers witnessed other anaesthetists been distracted at least once by smartphones14. Interestingly, only a minority agree to have restrictions on smartphones utilisation in workplaces. A possible reason for this discrepancy is the concern of compromising the useful features of smartphones if misguided policies to control their use are to be put in place.

Many healthcare organisations developed policies to guide their personnel toward the safe and effective use of smartphones in the workplace.  Saolta healthcare group does not have a policy to oversee the utilisation of smartphones. However, it has a governance to the health service executive which produced an online guidance about the use of smartphones in general, and social media in particular15. A worrying finding in our study is the very low proportion of anaesthetists who are aware of such policies. This raises important questions about accessibility to and adoption of these policies. It is the authors’ view that developing protocols to expand the benefits of smartphones while minimising their adverse outcome is very challenging.

Smartphone use during patient contact is very common among anaesthetists, but it can distract users. The increasing number of available health-related and medical applications, and the large uptake of these applications by healthcare professionals provide an opportunity for technology developers to further enhance these apps to improve patients care and outcome. As the smartphones could be a source of harm to patients if not used wisely, there is a need for increasing awareness and developing guidelines that encourage safe use of smartphones during clinical practice without jeopardising the beneficial effect of their use.

Conflict of interest
None declared