Allergic rhinoconjunctivitis (AR/C), has been shown to impact upon athletic performance. The championships of the unique, amateur Irish sports of hurling and Gaelic football (collectively known as GAA) take place during the prime pollen months of summer. Elite GAA players must perform optimally when most exposed to pollen. Elite GAA subjects (n=254) underwent skin prick testing to 6 aeroallergens and completed a validated questionnaire (AQUA), producing a score indicating likelihood of having allergy. The prevalence of allergy (positive to at least one aeroallergen on SPT and positive AQUA score) was 27.1% (n=69). Sixteen and a half percent (n=42) of the subjects tested had grass pollen AR/C while 22% (n=54) had house dust mite AR/C, though none were on standard medical therapies or had used allergen-specific immunotherapy. Grass pollen AR/C prevalence appears as common in elite Irish athletes as it is in other countries. It appears to be mild rather than well controlled in these subjects.

Allergic rhinoconjunctivitis (AR/C) currently affects 1.4 billion people worldwide1 and its prevalence is increasing.2 It is under diagnosed and undertreated3,4. The burden of this disease and its effect on everyday quality of life is substantia.5-8. Further research in this area is also encouraged by the relationship of AR/C with asthma, eczema and the allergic march9 and continuously improving treatment options. Professional athletes are more likely to have a prior diagnosis of allergy than controls10. Prevalence rates of AR/C in athletes vary from 29%11 to 44%12. AR/C in athletes is more problematic than in the general population, given both their need to perform at an optimal level physically and the propensity of sport to worsen symptoms13. House Dust Mite (HDM), a common persistent allergen, has a particular effect on sleep14 and HDM-sensitive subjects from the general population report reduced quality of life year-round15. Athletes need sufficient sleep before competing16 and as part of post-performance recovery17. In intermittent AR/C due to grass and tree pollens, the main impact upon quality of life and performance occurs during the specific pollen season6,18. This can be seen in the general population, for example, in state examination performance in UK teenagers. During the summer months students with symptomatic AR/C perform worse than in trial examinations taken outside the pollen season19. Similarly, pollen season is particularly associated with worse athletic performance18.

Allergic rhinoconjunctivitis is common in Irish schoolchildren and its prevalence is increasing 20, suggesting that the (to date unmeasured) AR/C prevalence in Irish adults may be also high. Intermittent AR/C relating to grass and tree pollens is particularly relevant to Irish athletes who partake in two of the main sports in Ireland: hurling and Gaelic football (both governed by the Gaelic Athletic Association - GAA). Major GAA competitions are run throughout the grass pollen season in an outdoors, grass-based environment, unavoidably exposing participants to high grass pollen counts. This is in direct contrast to rugby and most other popular sports in Ireland which take place outside of these months. GAA players are exposed to high grass pollen counts and are expected to perform at peak physical levels when most exposed to it. It is widely acknowledged that elite GAA athletes train and perform at an exceptional standard for amateurs. Few medical studies have been conducted involving GAA athletes. Little is known about their health or training habits, and nothing is known about their allergy status. Few if any studies have been published on allergy specifically in Irish athletes, and allergy testing in the club/community setting has not been widely performed to our knowledge.

Permission for this study was granted by the Clinical Research Ethics Committee of the Cork Teaching Hospitals. The study was designed as a cross sectional study. Two hundred and sixty male athletes from 12 male GAA teams which competed at an elite standard (senior club/county/intervarsity level), were recruited between August and October 2014. Subjects were verbally asked three questions pertaining to the exclusion criteria relating to safety and reliability of the test being used: skin prick testing. These were: use of antihistamines in the last 48 hours (n=1); age under 18 (n=5); and asthma that was not well controlled (n=0). Allergen skin prick testing (SPT) was performed on site in their club (solutions donated by Stallergenes Corporation and lancets by ALK-Abello Ltd). A positive SPT is a mean wheal diameter of >3mm after 15 minutes, in the presence of a positive control response to histamine of >3mm and no response to the negative control of saline. Permission was obtained to use the Allergy Questionnaire for Athletes or AQUA, which scores based on allergy symptoms. A total AQUA score of five or greater was shown by Bonini et al21 to have the best predictive value for allergy. The questions were weighted as recommended by the original authors. Both atopy and a positive AQUA score were required for the diagnosis of AR/C.

Data was coded and all analyses were conducted on IBM SPSS Statistics Data Editor. AQUA scores are presented as mean ± standard deviation (SD). Positive likelihood ratio was calculated using the formula: LR+ = sensitivity/ (1-specificity). Univariate comparisons of two samples were performed by Mann-Whitney-U test or Chi-squared test of contingency, and a confidence interval of 95% was employed. One sample binomial tests were used to compare observed frequencies with expected population frequencies. The level of significance was accepted at p<0.05.

Results were obtained for 254 male athletes between the ages of 18 and 38.

Seventy-three (28.7%) subjects reported a previous diagnosis of one or more of the allergic diseases listed in Table 1. However, 49.3% (n=36) of these subjects reported never having used anti-allergy medications. Skin prick testing found 37.4% (n=95) of subjects were sensitised to at least one aeroallergen (Table 2). Overall, 47.2% (n=120) of subjects had a positive AQUA score of ≥5. This was then cross matched to the subjects’ atopy status. The mean score for atopic individuals was 8.6 ± 5.9, while the mean score for non-atopic individuals was 3.7 ± 4.7(p<0.001). A positive score was significantly predictive of atopy (LR+= 3.03), with a positive predictive value of 0.73 and a sensitivity and specificity of 57.5% and 81% respectively. In total, 27.2% (n=69) of subjects met the criteria for diagnosis of AR/C (atopy and positive AQUA score). The prevalence of AR/C to each aeroallergen is presented in Table 3. The overlap between aeroallergen sensitivities in AR/C positive subjects is shown in Figure 1.

HDM sensitisation was most prevalent, affecting 81.2% (n=56) of those with AR/C, followed by grass pollen. No other aeroallergen sensitisation occurred in isolation. The median number of allergic subjects per team was 5.75 (range 4-7). The AR/C prevalence of 27.2% was compared to that of the general population of the UK and Europe (26% and 22.7% respectively22, as no appropriate Irish figures are available for a direct comparison. One sample binomial tests showed no statistically significant difference (p=0.362 and p=0.052 respectively). The Number Needed to Screen to identify an athlete with undiagnosed allergy was 12.7 subjects.

One hundred and six subjects (41.7%) reported using food supplements such as vitamins, amino acids or creatine powders occasionally, while 18.5% (n=47) reported regular use of such supplements. One hundred and fifty-four (60.6%) athletes trained ≥4 times a week. Two hundred and forty-two of the subjects (95.3%) were non-smokers. Smoking prevalence among Irish males according to HSE 2013 data 23 is 23%. Elite GAA athletes were therefore significantly less likely to be smokers than the age-related general population (p<0.01). One hundred and seventy-one (67.3%) of subjects had used one or more medications (excluding anti-allergy medications) in the past year. There was no statistically significant difference (p=0.069) between the use of medications in those with AR/C (76.8%, n=53) and those without AR/C (63.8%, n=118). Fifty-eight (22.8%) of subjects were prevented from training by infection at least once a year. No difference was found in infection rate between those with AR/C and those without (p=0.21). 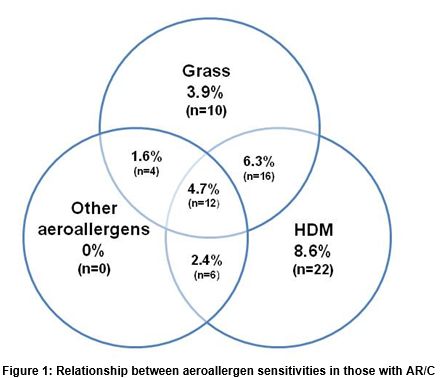 The prevalence of AR/C among GAA players was not significantly different to that of the general population of Europe and the UK. All twelve elite teams tested had at least one member with inhalant allergies, so it does not appear that AR/C is an absolute barrier to success in GAA sports. However, given the high levels of symptoms reported in the AQUA survey, it can be inferred that it is a bothersome affliction for these subjects, despite being under-diagnosed. The low rates of medication use despite a comparable prevalence to other countries suggests the AR/C is relatively mild in these elite athletes. Grass pollen and HDM AR/C were the only allergies to occur in isolation and, importantly, every subject found to have AR/C had sensitisation to at least one of these allergens. This marks them as particularly influential allergens. No subject reported awareness of HDM allergy, despite being obviously symptomatic on AQUA scores. There is wide scope for year round improvement of quality of life in athletes with HDM allergy. Grass pollen AR/C is a very treatable allergy with oral and nasal medications and sublingual immunotherapy, though the latter is not yet used extensively in Ireland24. Pre-emptive treatment approaching the pollen season could prevent months of unnecessary nasal and ocular problems and possible sporting underperformance caused by grass pollen allergy. Screening of GAA athletes may be worthwhile in very competitive teams such as inter-county teams. Skin prick testing is a reliable, relatively inexpensive and reproducible method of screening. As grass pollen allergy rarely occurs in isolation, elite athletes known to have symptoms of AR/C should be screened for other allergies. This could arm athletes with the best information to adapt their lifestyle and surroundings to reduce exposure to allergens.

Less than 5% of these subjects were smoking, considerably lower than the average prevalence among males in Ireland of 22.9%. The majority of these athletes were training ≥4 times a week for 1-2 hours. Given the unique place and reach of the GAA within the Irish society, the potential positive effects of participation in GAA and other sports in promoting good player health and lifestyle habits are worth exploring. Further research is needed to strengthen the implications of these findings, including the study of elite female athletes in the GAA and in both sexes in other sports.

This is the first such allergy evaluation of elite Irish athletes. A basic framework has now been laid down which would allow for allergy testing within a club environment rather than in a medical facility in both the GAA and in other popular Irish sports. A study on the general population of Irish adults and their allergy status would be useful given the under-diagnosis of allergy in this cohort of subjects. The GAA athlete is an open book of research potential, in particular in regards to health behaviours. The results of this project could encourage pre-emptive pre-pollen season AR/C assessment and treatment and could heighten awareness of the effects of allergy on both Irish athletes and the general population.

This study would not have been possible without the kind help of T Crowley, B Cody, N Quinn, N Roche, J Grainger and the managerial teams and players in Kilkenny and UCC. We thank Prof S Bonini, Naples, Italy for permission to use the AQUA questionnaire and Ms Ann Matthews, Stallergenes, Ireland and Brian Gavin, ALK Ireland for donation of test materials.

Funding None. This study was undertaken by MG as a final year research module project in School of Medicine UCC.

JOBH has recived speaker fees and travel support form manufacturers of allergen immunotherapy products, and from allergy diagnostic companies. MG and DH have no potential conflicts of interest to declare.

6. Mullol J. A survey of the burden of allergic rhinitis in Spain. Journal of investigational allergology & clinical immunology. 2009;19:27-34