Background
Pseudomonas aeruginosa (PA) infection is associated with an increased morbidity and adverse prognosis in children with Cystic Fibrosis(CF). The aim of the study was to evaluate the prevalence and characteristics of PA over a ten year period at a single paediatric tertiary referral centre in Ireland.
Methods
This was a retrospective cross-sectional study. Patient’s case notes, microbiology laboratory results and CF Registry of Ireland(CFRI) data were used to collect the data.
Results
The overall chronic PA infection prevalence was 28.1%(45/160) in 2004 and 21.3%(35/164) in 2014. In 2004, 54/160(33.8%) patients were never infected with PA, 27/160(16.9%) were free for 12 months and 34/160(21.3%) were intermittently infected. In 2014; 80/164(49%) patients, 38/164(23.2%) and 11/164(6.7%) were never infected, free for 12 months and intermittently infected respectively.
Conclusion
There has been a decline in the overall prevalence of PA infection and a change in the pattern of prevalence over the last decade at our Centre.

Introduction
Cystic fibrosis (CF) is a life-limiting disease with pulmonary insufficiency as the main cause of mortality1. Pseudomonas aeruginosa (PA) is the major pathogen involved in the decline of lung function in children with CF2,3,4,5. It is well known that chronic infection with PA is associated with an increased morbidity and adverse prognosis in children with CF6,7,8,9. Chronic PA infection, especially the mucoid phenotype growth, can rarely be eradicated10 However, a newly acquired PA infection can often be eradicated successfully from the lower airway10,11,12 with success rates above 75%13,21. Successful PA infection eradication has been associated with slower disease progression in CF11,12,13.

In 2015, the US Cystic Fibrosis Foundation Registry reported that 47 % of CF patients had positive PA infection (17% intermittent infection and 30 % chronic infection based on Leed’s criteria) with a median age of 5.5 years14. They have reported that around 30.4 % of CF patients younger than 18 year of age had positive PA culture in 2015.  From an Irish perspective, a recent study demonstrated an overall prevalence of PA infection of 31% (19% chronic and 12% intermittent infection). This study included all patients (children above 4 years of age and adults) with CF registered in the Cystic Fibrosis Registry of Ireland (CFRI) database in 201316. To date, there has been no study examining the change in prevalence of PA infection over time in purely paediatric CF population in Ireland. Our aim was to estimate the change in prevalence of PA infection at our centre over the period of a decade.

Methods
A retrospective observational study was performed at Our Lady’s Children’s Hospital, Crumlin (OLCHC), Dublin, the largest paediatric tertiary CF referral centre in Ireland. Patient’s case notes, microbiology laboratory results and data from the Cystic Fibrosis Registry of Ireland (CFRI) database were used as sources for the data collection. We compared the prevalence of PA infection in 2014 with 2004.

Patients were grouped into 3 age groups (0-5 years, 6-11 years, and 12-18 years) and the prevalence of PA infection has been compared in both years among the three different age groups. Additional data including the patients’ best FEV1 value performed over the year 2014, height, weight and body mass index (BMI) on the same day of best FEV1 were collected to examine for clinical differences between the four classifications of PA infection.

Demographics of the patient population: 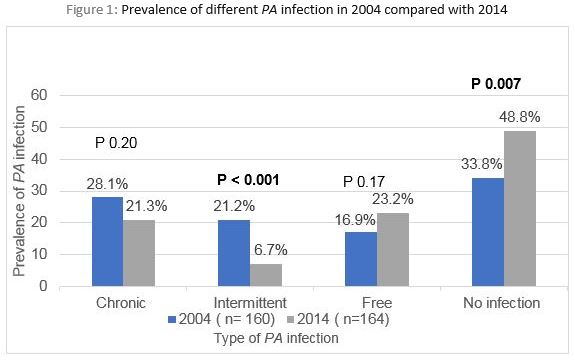 Discussion
In our single center, retrospective, observational study, we have observed a significant decline in the prevalence of PA infection, and a change in infection pattern over a 10-year period.

In our study, the overall prevalence of PA infection was 28 % in 2014 (21.3% chronic and 6.7% intermittent infection). A recent Irish study examining PA infection rates in CF patients reported a slightly higher prevalence rate of 31% (19% chronic and 12% intermittent infection). However, this study included both adults and children between 4-69 years of age and the median age was 18.1 years16.

There are many classification systems used to classify PA infection in the literature which led to variability in reported prevalence of PA infection in children and adults with CF. Based on the recommendation by the European CF Society patient registry guidelines, we have used Leed’s criteria to define PA infection in this study.

Our results showed an interestingly significant decline in the prevalence of intermittent PA infection and increase in the number included in the never infected group over the past ten years. A US study also reported a decline in overall PA infection prevalence in younger patient with CF (< 18 years of age) from 50.7 % in 1995 to 30.4 % in 201514. The reason for such decline in our center is likely multifactorial. Newborn screening for CF was introduced into Ireland in 2011 and it is likely that earlier diagnosis plays a significant role in the decline of chronic PA infection rates. Other changes to the CF service over this timeframe include increased number of CF multidisciplinary team members, improved PA eradication treatment options and a strict patient segregation policy during hospital attendances for all CF patients.

There are several limitations to consider with our study. We acknowledge that this is a single center study but given the fact that OLCHC is the largest tertiary paediatric CF center in Ireland, the above findings likely provide an estimate of the true overall prevalence of PA infection in children with CF in Ireland.

Acknowledgments
We would like to thank Abaigeal Jackson (Cystic fibrosis registry of Ireland) and Dr Catriona Logan for their valuable support in retrieving the needed data. Our appreciation extends to Lisa Martyn, Barbara Brudell and Mairead Ryan who contributed in completing the data collection. Preliminary results of the present work have been presented at Irish thoracic society meeting on 9th of November 2017.

Conflicts of Interest Statement
I declare that I have no conflict of interest.