Introduction
Cervical Check, Ireland’s National Cervical Screening Programme was set up in September 20081.  The programme provides free cervical smears to all women aged between 25 and 60 years to detect precancerous changes in the cervix. If abnormalities are detected on cytology or for clinical reasons, patients are referred for colposcopy. The colposcopy service identifies and treats patients with precancerous disease to prevent progression to cervical cancer2. To date, Large Loop Excision of the Transformation Zone (LLETZ) has been the main treatment provided1.  Between 1.9.2013 to 31.8.2014 6,725 treatments were performed in Ireland1.  Of these 5,674 (84.4%) were LLETZ procedures1. However, there is increasing evidence that LLETZ for treatment of cervical intraepithelial neoplasia (CIN) is associated with preterm delivery and may be associated with increased perinatal mortality3,4,5.
Cold Coagulation is an ablative technique that was developed by Kurt Semm in the 1960’s. Prior to treatment, a biopsy is taken to confirm the presence of CIN and exclude invasion. The Semm cold coagulator is heated to 100 °C, and applied to the transformation zone of the cervix for 30 seconds6, 7. Two, three, or four applications may be used depending on the size of the transformation zone. A recent meta- analysis looking at the efficacy of Cold Coagulation has found it to be as effective as LLETZ for treating CIN, with cure rates of up to 96%, and having the added benefit of no documented negative impact on fertility and subsequent pregnancies6. Until recently, eradication of CIN was assessed by cervical cytology, six and eighteen months following treatment8. In 2014, the National Cervical Screening Programme introduced an additional test of cure which assesses the presence of high risk Human Papilloma Virus (HPV) subtypes8. In the light of recent publications highlighting the adverse effects of LLETZ on pregnancy outcome, we introduced Cold Coagulation as a treatment option for some of our patients.  This study assesses our initial experience with this treatment modality.

Methods
This study was undertaken on the first 200 women who underwent cold coagulation and for whom there was six months follow up data.  Data was collected prospectively for patients treated between September 2014 and September 2015.  As per the National Cancer Screening Service Standard Guidelines all patients were required to have a colposcopically directed punch biopsy8. Patients with persistent low grade disease (CIN 1) or higher grade disease (CIN 2 or 3) were invited back to the clinic and were given the option of having a cold coagulation treatment if they fulfilled the criteria for treatment using this technique8. Patients were not considered suitable for cold coagulation if they were pregnant, if they had a previous ablative or excisional treatment, if the entire transformation zone was not visible, if there was suspicion of endocervical involvement, if there was evidence or suspicion of glandular or invasive disease or a discrepancy between the cytology and biopsy. At the clinic the procedure was explained to the patients and written consent was obtained. Patient data was recorded in the Mediscan colposcopy database and the APEC pathology database. A random sample of 200 patients who underwent a LLETZ procedure during the study period and who had follow up data available at 6 months was used to compare treatment success. All patients had a smear and HPV test done in the colposcopy clinic six months following treatment.  Success was defined as negative cytology or a negative HPV test (for high risk sub-types HPV-16 18, 31, 33, 35, 39, 45, 51, 52, 56, 58, 59, 66 and 68). The data was analysed in Excel. Ethical approval was obtained from the Clinical Audit department of the Rotunda Hospital. 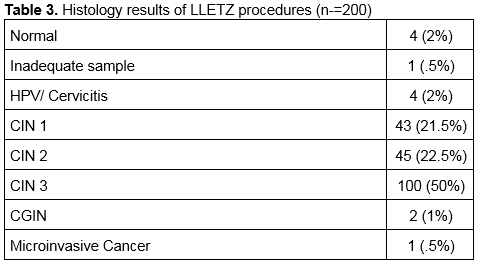 Discussion
This is an audit of our initial experience with cold coagulation, which was introduced in 2015 as a treatment option for patients with cervical intra-epithelial neoplasia.  Subject to strict criteria, it is offered as a choice for nulliparous women or for those whose families are incomplete. We decided to introduce Cold Coagulation as a treatment for our patients because the current gold standard treatment, LLETZ, has been linked with long term obstetrical complications such a preterm labour and miscarriage3,4. Published studies to date have used cytology alone as a test of cure to measure treatment success. HPV testing was introduced in 2014 by the National Cancer Screening Service as a test of cure following treatment of CIN. IN view of this, we reviewed both cytology and HPV status as tests of cure8. Despite our relative inexperience with this treatment modality, our results have been reassuring. Using cytology as a test of cure, cold coagulation was successful in 173 (86.5%) women (Table1). This compares favourably with other national studies. A recent study in University Hospital Limerick by McCarthy et al, included 93 patient who were treated by cold coagulation and reported treatment success of 79.9% for patients with CIN1 and 81.1% for patients with CIN2/39.  A study in Northern Ireland reviewed 725 patients who underwent cold coagulation and reported negative cytology in 632 (87.1%) cases10. However when compared with international data, our cure rate is lower. A study in the UK by Parry-Smith et al which looked at 557 patients who were treated by cold coagulation over a ten-year period recorded treatment success rates of 95.7%11.  Similarly, a study done by Duncan in the early 1990’s looked at 1,628 women with CIN3 treated by cold coagulation, and found that disease was eradicated in 95% of cases when reviewed at one year7.

Previous studies have shown that cold coagulation is well tolerated by women and has minimal side effects and no documented long term impact on fertility6,9. We found cold coagulation to be a very safe procedure with no significant complications. One of the main reasons for a renewed interest in cold coagulation relates to the potential pregnancy morbidity that may be associated with LLETZ. The volume of cervical tissue removed is important.  Studies have shown that the deeper the excision (>10 mm) or greater amount of tissue removed, the higher the risk of premature delivery in subsequent pregnancies5. During cold coagulation, on average 4-7mm of the cervix is ablated6. It is presumed that cold coagulation is likely to be associated fewer pregnancy related complications than excisions techniques such as LLETZ although this data has not been published. However, morbidity would be expected to be low based on a meta-analysis of perinatal and obstetric outcomes that included other forms of ablation5. There is an urgent need for a randomised controlled trial comparing the safety of LLETZ and Cold Coagulation, particularly in relation to pregnancy morbidity.

Conflict of Interest
The authors have no conflicts of interest.