In the era of antenatal screening for congenital heart disease (CHD), infants presenting with an undiagnosed significant CHD are rare. However, term infants admitted with an initial diagnosis of TTN and a prolonged oxygen requirement often undergo an echocardiogram. We aimed to assess whether this practice yields any additional cases of undiagnosed CHD. We performed a retrospective chart review over a three year period [2013 – 2015] of term (> 36 weeks) infants admitted to the NICU for ≥ 5 days with a diagnosis of TTN and received an echocardiogram. The presence of CHD on the echocardiogram was assessed. Forty-seven infants were enrolled. The median age of echocardiogram was day four [2 – 8]. No infant had a diagnosis of significant CHD on the postnatal echocardiogram. A small muscular VSD was identified in two infants. Routine echocardiography for this cohort of infants to rule out major CHD appears to be unwarranted.

Introduction
Transient tachypnea of the newborn (TTN) is one of the most common causes of respiratory distress in the term newborn, characterised by tachypnea, recession, need for oxygen and typical changes on chest radiographs. It has an incidence of approximately 6 per 1000 live births1 and is a common reason for admission to neonatal intensive care units (NICU) accounting for up to 45% of all term infant admissions2. TTN is felt to be a self-limiting condition with a good prognosis3 Patients are typically symptomatic for 12-24 hours, but up to 30% of infants can have symptoms of TTN for more than 72 hours3.

In the setting of TTN, prolonged oxygen need (beyond 72 hours) often prompts investigation of other potential disorders. These include persistent pulmonary hypertension of the newborn (PPHN) and congenital heart disease (CHD)4. Echocardiography is frequently employed as a diagnostic tool in newborn infants with a persistent oxygen requirement5. However, there is little evidence to support this practice, which can prolong hospital stay and can have a significant impact on resources. In addition to this, improvements in antenatal detection rates of CHD have led to a significant reduction of undiagnosed cases over the last 20 years6 with rates of prenatal diagnosis now reported to be above 75% in the UK7.

With the changes in antenatal imaging and the lack of evidence to support routine echocardiography in this cohort, a review of current practises is warranted. The aim of this study was to determine our detection rate of significant congenital cardiac disease in infants admitted with an initial diagnosis of TTN and an isolated prolonged oxygen requirement (≥5 days) without other symptomatology who underwent echocardiogram. We hypothesised that in this cohort of infants, echocardiography would not yield any additional cases of significant congenital cardiac disease, or PPHN.

Method
This was a retrospective cohort study carried out in the in the Rotunda Hospital, Dublin, Ireland. This is a tertiary neonatal centre that caters for up to 9000 live births per year. Ethical approval was granted from the local Ethics Committee. We included all infants born at >36 weeks gestation that were admitted to the NICU with a discharge diagnosis of TTN, required supplemental oxygen for >5 days and received an echocardiogram. Data was collected on patients over a three-year period [2013 – 2015]. The initial diagnosis of TTN was a clinical diagnosis made by the physician admitting the infant to the NICU and documented in the medical notes. Patients >36 weeks gestation with a diagnosis of TTN were identified from the hospitals discharge database. These patients were then cross-referenced with the echocardiography local archiving system to identify those that had received an echocardiogram.

Data extracted from the medical notes included antenatal characteristics and patient demographics. Postnatal variables studied included: delivery mode, 1 and 5 minute Apgar scores; need for resuscitation; and reasons for admission such as low oxygen saturations and respiratory distress. The clinical examination at admission, use of antibiotics and early radiographic findings were also recorded.

All echocardiograms were carried out by a paediatric cardiologist in accordance with recently published guidelines8. All echocardiograms were retrospectively reviewed by a cardiologist for evidence of CHD and PPHN. In addition to this, the initial report at the time of echocardiogram was also noted. We defined significant congenital heart disease as any cardiac lesion other than a patent foramen ovale, small atrial (ASD) or ventricular defect (VSD) and a patent ductus arteriosus (PDA). PPHN was defined by the presence of a tricuspid regurgitant jet indicating a right ventricular (RV) pressure greater than two thirds of the systemic systolic pressure; septal flattening or bowing into the left ventricle (LV); bidirectional or right to left shunting across the PDA in the absence of CHD. Data were tested for normality using the Shapiro-Wilk test and presented as medians [inter-quartile range] or means (standard deviation) as appropriate. Categorical data were presented as proportions (%). Descriptive statistics were used to present the results.

Results
A total of 187 infants over 36 weeks gestation were admitted to the NICU with respiratory morbidity necessitating an oxygen requirement >5 days. Forty-seven infants were diagnosed as TTN and underwent echocardiography (see figure 1). Table 1 outlines the demographics of the infants included in the study. All 47 infants had a normal antenatal anomaly scan. None of the infants had a history of clinical or histological chorioamnionitis. Their median 5 minute Apgar score and pH were 10 [9 – 10], 7.35 [7.29 – 7.40] respectively. 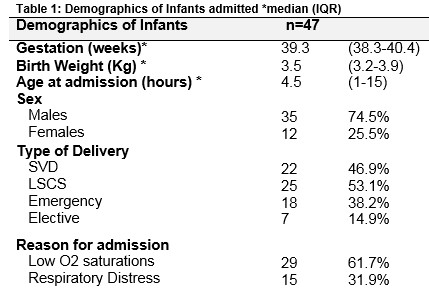 All patients had a diagnosis of TTN as documented in the medical notes. The median oxygen on admission was 90 [88 – 95] %. Forty-two infants underwent a chest radiograph. Table 2 outlines clinical findings, investigation and management of infants on admission to the NICU. Forty-five infants (96%) underwent a septic screen. Oxygen saturations were maintained between 92-95%. Hyperoxia tests as a means of ruling out CHD were not formally performed in these patients in the NICU. Patients were discharged when their oxygen saturations were 95% or above on room air for a period of 24 to 48 hours. 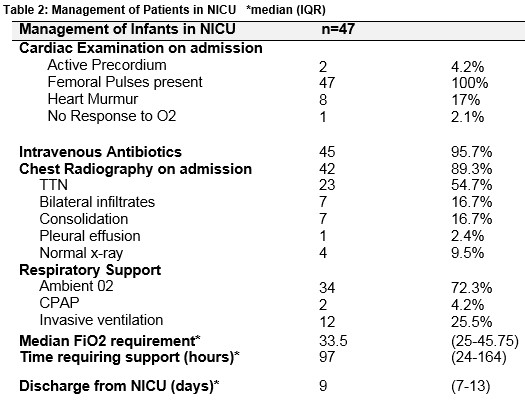 Infants underwent an echocardiogram on day 4 [2 – 8] of age. None of the infants had a diagnosis of cyanotic or ductal-dependent CHD on the postnatal echocardiogram. Nine infants (19%) demonstrated significant pathology on the echocardiogram. A small muscular ventricular septal defect was identified in two infants, and one infant had a large PDA by discharge. All three lesions resolved by 6 months on routine follow up. Six infants had a diagnosis of PPHN. Their echocardiogram occurred on median [IQR] of day 1 [0 – 3] of age; four were invasively ventilated at the time and two had an oxygen requirement > 50%. All were discharged with no evidence of PPHN on follow up echocardiograms on median day of life 12 [10 – 13].

Discussion
This study appears to represent a typical cohort of term infants with TTN, with 74.5% of the cohort being male and over 50% delivered by caesarean section9. None of the infants had a diagnosis of a significant congenital heart defect. A small muscular ventricular septal defect was diagnosed in two infants. In addition to this, 6 infants had a diagnosis of PPHN. Of these, 4 patients were invasively ventilated at the time of echocardiogram and two had an oxygen requirement > 50%.

Infants admitted with tachypnea, or a requirement for supplemental oxygen generally have a chest radiograph and are treated with intravenous antibiotics because respiratory distress can be a presentation of early onset sepsis10. These were performed in 89% and 96% of patients in our study respectively. In patients with prolonged symptoms or an increasing oxygen requirement, other diseases are sought including congenital pneumonia and pneumothorax [both of which can be generally be identified on chest radiography]. Although echocardiography is also frequently performed in search of a cardiac pathology in these patients, there is a lack of evidence supporting this practice. A study evaluating its use in a neonatal unit found that cardiorespiratory distress without a murmur was the second most common indication for echocardiography5. The results of our study suggest that this approach may not yield a clinical benefit in this patient cohort. It is important to note that in our study, there were no concerning findings on cardiovascular exam. A murmur was present in 17% of patients and importantly all patients had normal femoral pulses.

The diagnosis of CHD is more frequently being made antenatally, thanks to advances in antenatal imaging. Recent studies have shown that the detection of major cardiac disease in the antenatal period has increased from 31% from 2006-2008 to 91% in 2010-201311. Similarly, rates of detection for duct dependent lesions rose from 19% to 100% CHD. This has significantly reduced the number of newborns presenting with an undiagnosed cardiac defect11. It must be noted that this does not apply in maternity centres where 20 week gestation anomaly scans are not available, a fact which should be considered on risk assessment of these patients. This should be taken into account when considering the clinical application of our research for these centres, although the same physiological principles apply.

Ninety eight percent of our patients demonstrated an improvement in oxygen saturation measures in response to oxygen treatment, virtually out ruling the possibility of cyanotic CHD in these patients12. The one patient who failed to respond to oxygen had significant PPHN which was diagnosed on echocardiography13. A total of six patients had a diagnosis of significant PPHN. This group of patients were sicker as evidenced by need for ventilation and high oxygen requirement. In patients with these features, echocardiography remains an important tool in the diagnosis and characterisation of PPHN13,14. While two patients were incidentally diagnosed with small muscular VSD’s, they were not clinically significant and did not contribute to the patients’ symptoms. It is now known that the incidence of small sub clinical VSD’s in the early neonatal period is higher than was previously believed. Roguin et al detected rates of small, isolated VSD’s in over 5% of term and preterm infants screened, almost 90% of which closed spontaneously15,16.

A reduction in unnecessary echocardiography scanning may have implications for the management of these patients going forward, particularly in centres where bedside echocardiography may not be readily available and patients may require transfer to tertiary care centres with on-site cardiology. Therefore, we feel that echocardiography in patients with a presumed diagnosis of TTN should be performed on a more selective basis. It is important to target sicker infants that may have PPHN or infants with a high suspicion of CHD i.e. lack of a response to oxygen or abnormal cardiovascular examination. The overall study number is small and it is therefore not possible to draw definitive conclusions. However, we have demonstrated that in a tertiary neonatal centre over a 3-year period that no additional cases of significant CHD were detected in this patient cohort. Another limitation of this study is the potential for variability in the initial diagnosis of TTN. Only 54.7% of our patients had an x ray diagnosis of TTN which is consistent with the literature17. Patients were included based on the diagnosis made by the treating physician.

Conflict Of Interest
No conflict of interest to declare