We report 85 lesions of non-melanoma skin cancer in 58 patients, representing 9% of the minor surgical workload of a single general practitioner. Cases were studied in order to describe pathology, management and outcomes. Eighteen percent of lesions were referred, mainly because of central facial site and larger size. Of the lesions treated in the surgery, all but four were treated surgically. Quantitative margins of lateral and deep excision were reported for 50% and 30% of specimens respectively. Lateral histological margins of clearance were narrower for head and neck lesions. Incomplete excision occurred in 4%. There was one recurrent lesion after two years of follow-up. A majority of non-melanoma skin cancers at this clinic were managed safely without referral to secondary care. Quantitative reporting of tumour free margins for skin cancer is lacking.

Introduction
There were an average of 9,102 incident cases of non-melanoma skin cancer (NMSC) annually, in the Republic of Ireland in the interval 2010 to 20121. These lesions are most commonly of squamous cell (SCC) (30%) and basal cell carcinoma (BCC) (68%)2. The incidence of NMSC has been increasing at three percent annually since 20011. NMSC is rarely fatal, accounting for 50 deaths per annum between 1994 and 20112. Irish General Practitioners (GPs) have traditionally provided skin surgery services which can include biopsy or complete excision of NMSC. This reflects the pattern of practice in the United States3, Canada4, Australia5, New Zealand6, and the United Kingdom7. There is no Irish evidence comparing the quality of excisions of NMSC by GPs and hospital surgeons. Internationally, much of the evidence indicates better diagnostic accuracy among skin specialists (dermatologists and plastic surgeons)6,8,9,10,11 and a greater likelihood of adequate excision of malignancy by those operators11,12,13. More recently, Murchie’s analysis of excisions of BCC showed that GPs performed as well as non-skin specialist hospital surgeons in diagnosis and excision12 and Delaney showed that GPs excised SCC as well as skin specialists, regardless of whether the GP was a frequent or infrequent operator14. The present study was a retrospective review of NMSC presenting in one general practice.

The objectives of the study were to describe the presentation and disposal of cases, to describe the features of referred and treated cases and to investigate the outcomes of treatment. NM has a special interest in skin surgery and conducts a weekly procedures clinic. Most referrals are received from other doctors within the group, with some external referrals. The other GPs undertake procedures but most of the skin cancer treatments are provided by NM.

Methods
NM is a principal in an eight doctor group general practice in a large town with a list size of 19,000 patients, of whom 7,500 are GMS eligible. A disease register is maintained of patients treated for non-melanoma skin cancer. The data presented is derived from retrospective review of patient files for the interval January 2012 to July 2015. For each case, diagnosis, lesion size, lesion location, disposal and completeness of excision was studied.

Results
There were a total of 971 minor surgical procedures undertaken in the three and a half years studied. The frequency of procedures is given in Table 1. 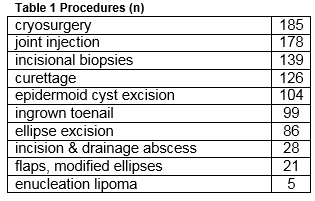 Eighty-five (9%) of these procedures related to the management of NMSC of which 40 were BCC, 24 SCC and 21 Bowen’s disease. Of the 64 invasive cancers 58 (91%) were managed at the practice and six (9%) were referred following biopsy. In addition seven suspected NMSC lesions were referred without prior biopsy. There were therefore a total of 71 diagnosed NMSC lesions of which 58 (82%) were managed in general practice and 13 (18%) referred. Three melanomas were also referred. There were 58 invasive cancers in 49 patients, 20 in women and 38 in men. The mean age of female patients was 66 (range 39-91) and of male patients 71 years (44-91). Table 2 describes the types of skin cancers treated. For NMSC treated at the clinic, 54 of 58 had excision, and four had biopsy followed by cryotherapy (one) 5 Fluorouracil (one) and no further treatment (two). Of the excisions the majority were simple ellipses (40.) Variations of ellipse and small flaps made up the remainder: Crescentic excision (two); O-T excisions (5); Island Pedicle Flap (four); H plasty (two) simple advancement flap (one).

The majority of presenting lesions in this series occured on the head and neck (54/71, 76%.) For lesions treated at the clinic, 64% (37/58) arose at head and neck sites. Referred lesions were, on average, larger 15mm vs 8mm (t-test for comparison of means, p=0.04) More head and neck lesions were referred (11/47, 24%) than lesions arising elsewhere (3/21, 13%) though the difference in this sample was not statistically significant (Chi2 test p=0.27.) Referral was made because of the site of the lesion and the anticipated difficulty in completing excision. Figure 1 illustrates the distribution of facial head and neck lesions referred and treated. The majority of central facial lesions were referred (6 of 8 lesions), whereas maxillary, frontal and neck sites predominated among cases treated in general practice. 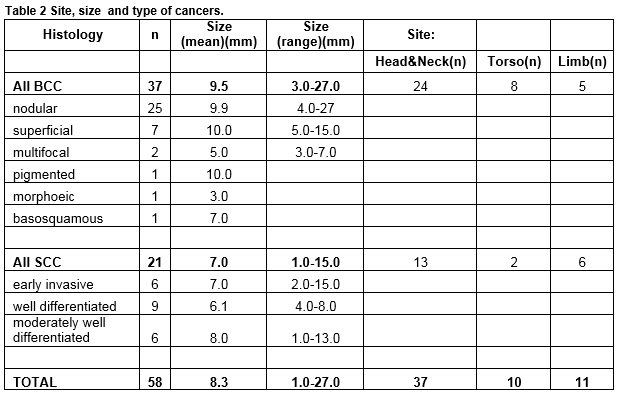 Among the 54 excisions, histological clearance was reported qualitatively as either excised or not in 50 (93 %.) The least lateral margin was reported as a measurement in 27 (50 %.)   A measurement for the deep margin was given in 16 (29%) of the histology reports. There was no significant difference between the mean least lateral margin of excision on the face, head and neck (2.6mm) and on the trunk and limbs (2.8mm). The mean lateral margin for excision of SCC (2.5mm) was effectively the same as that for BCC (2.7mm). There were more close or involved margins reported on the head and neck, where 7 of 18 (29%) lateral margins were between one and two mm compared to one of 9 (11%) at other sites, though in this small sample this was not statistically significant (“N-1” Chi 2 test , p=0.14). 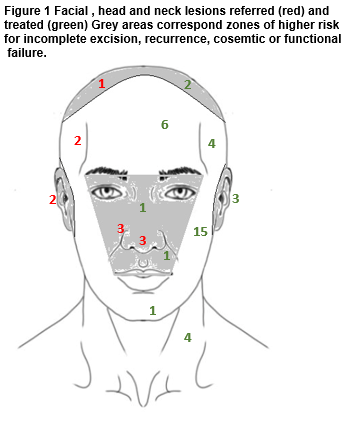 On the head and neck there were two excisions with involved margins among 34 excisions. These were a 10mm diameter nodular BCC on the pinna and a 10mm moderately well differentiated SCC of the temple. The former was a patient with comorbidities and a narrow margin only was attempted. This lesion has not recurred. The latter was excised as an ulcerated BCC with a 2mm surgical lateral margin and the reported involvement was unexpected. This patient was referred to a plastic surgeon. There were also two very close (one mm) margins, one on the temple and the other on the maxilla. The incomplete excision rate was 2/54 (4%) for the whole sample and 2/24 (8%) for lesions of the head and neck. There was one case of recurrent disease in a patient with facial BCC in the study interval occurring after two years of follow-up. This was a three mm diameter micronodular BCC of the maxilla barely excised as a biopsy punch (0.1mm lateral margin) and followed expectantly. Annual follow-up of each patient treated is ongoing for five years following last diagnosis.

Discussion
NMSC represents a small proportion (9%) of minor surgical cases managed in a group practice. The inadequate excision rate was 4% overall and 8% for lesions of the head and neck. There was one recurrence (two percent) during follow-up. Previous NMSC studies have tended to use qualitative or semi-qualitative approaches to judging cancer clearance. In the MiSTIC trial, the only extant randomised trial which included data on skin cancer excision by GPs, the three laboratories providing histopathology reports were required to provide a qualitative characterisation of clearance, without further scrutiny of the extent of margins13. In Murchie’s retrospective review of the adequacy of excision of BCC specimens by GPs, any margin >/= 1mm was regarded as disease-free12. Delaney in a similar study of SCC excision relied on the pathologists' assessment of whether or not margins were involved14. Goulding’s review of excision of malignancies by GPs also used a categorical approach in determining disease clearance reporting any specimen without margin involvement as adequately excised, without reference to the extent of the margin15. The Royal College of Pathologists in its Datasets for reporting BCC16 and SCC17 specimens adopts a semi-quantitative approach reporting least margin as follows: >5 mm ‘clear,’ 1–5 mm ‘close’ and <1mm ‘involved.’

There is a wide range in the reported rate of incomplete excision of NMSC. In Gulleth’s meta-analysis of papers reporting over 16,000 cases of NMSC, the rate was 14%18. In an Irish study of dermatology, plastic, general and ENT surgeon excisions of BCC, the rate of incomplete excision in 128 lesions was 8%19. In Hansen’s review from Australia of over 9,000 cases of NMSC excised by GPs with a special interest in skin cancer, the rate of incomplete excision was 6%20. Whether qualitative of quantitative reporting is undertaken, the standard approach to specimen analysis will at best report only 44%of the specimen margins21. Nevertheless, clinical guidelines on management of both BCC22 and SCC,23 rely on a quantitative analysis of the margin of clearance in order to establish likelihood of cure. Gulleth reported recurrence rates for 5mm, 4mm, three mm and two mm surgical (clinical) margins as 0.39%, 1.62%, 2.56%and 3.96% respectively, in a meta-analysis of studies of 16,000 cases.18

Surgical margins in this series were generally marked at two or four mm, though histological margins were, as expected, smaller24. The tendency to refer cases at more difficult sites is illustrated in Figure 1 and is consistent with accepted wisdom in relation to patient selection for surgery by non-skin specialist surgeons. Though the mean histological margin for lesions of the head and neck was not different to that achieved on the trunk or limbs, the proportion of close or involved margins is possibly a more informative statistic. By this analysis, disease clearance was less likely on the head and neck in our patients. The absence of recurrence over up to five years follow-up, among patients where excision as opposed to biopsy was undertaken, reassures somewhat. This may speak to the importance of surgical as opposed to histological margins in predicting outcome20, the known tendency to regression of some incompletely excised small NMSC lesions25 or an appropriate choice of lower risk lesions by size, site and subtype in this series.

It was not possible to study the clearance at the deep margin as this was reported in so few cases. Quantitative or at least a standardised qualitative approach to reporting surgical clearance would assist doctors in assessing their performance. A larger study across multiple sites and with longer follow-up would be required to establish definitively the outcomes of surgery for appropriately selected cases of NMSC in Irish general practice. This project focused on completeness of cancer excision. A future study could also usefully look at aspects of care not examined in this study, such as cosmetic and functional outcomes, timeliness of access to surgery and quality of follow-up.

Conflict of Interest
None declared