Trends in surgical mortality following colorectal resection between 2002 and 2012: A single-centre, retrospective analysis.

Surgical mortality is a commonly-used measurement of surgical risk. It is imperative that patients receive accurate, up-to-date information regarding operative risk. To date, studies investigating temporal changes in surgical mortality following colorectal resection in Ireland have been limited. This retrospective study investigates such trends in one of the eight centres for symptomatic and screen-detected colorectal cancers in Ireland, across an 11-year period. A steady decline in surgical mortality was found across this time, showing a significant difference in rates before and after centralisation of rectal cancer care and the advent of colorectal surgery as a surgical specialisation (5.2%, 1.52%). This has important implications for the organisation of colorectal cancer care in Ireland.

Introduction
Colorectal cancer accounts for 13.4% of all cancer in the Republic of Ireland, and is the third most common cause of death resulting from cancer1. Since 2007, rectal cancer care has been centralised to eight cancer centres. Furthermore, screen-detected colon cancer can only be operated on in these centres. These measures have coincided with the establishment of colorectal surgery as a surgical speciality, and an increased emphasis on multidisciplinary team provision of care. Preliminary data suggests that this refined approach to treatment has modernised rectal cancer management across the country; improved quality of surgical resection, and a reduction in the administration of post-operative radiotherapy was seen between 2007 and 20102. However, the relationship between surgeon and hospital caseload to overall quality of care, as determined by a wide range of surgical, pathological, preoperative and post-operative parameters is inconsistent, and does not appear to be a simple linear relationship3. Though this may be the case, surgical outcomes remain an informative data source for audit and analysis.

Of note, no investigations of temporal trends in Irish surgical mortality for colon and rectal resection have been completed to date. Previous studies have reported on rates for single years, mean rate across several years, or comparisons between two given years2,4. While this information provides us with a snapshot view of the current state of affairs, it does not provide definitive answers to the fundamental question: have the changes implemented in the organisation of care resulted in less patients dying in the perioperative period? Statistical validation of the new architecture for care is required across the country.

Post-operative or surgical mortality, defined as death within 30-days of surgery, is a commonly-used measurement of surgical risk5. Accurate, up-to-date data is of vital importance both to the clinician and the patient in guiding the patient counselling and consenting process. Numerous predictive models of post-operative mortality following colorectal resection have been developed, including the CR-POSSUM, ACPBGI, and revised ACPBGI models6,7,8. These models use patient demographics and physiological variables to estimate the risk of surgical mortality for an individual patient. Such models, however, cannot account for temporal changes, nor local practices and expertise which may influence the absolute surgical mortality and morbidity for any given centre.

Methods
Data was extracted from the St. James’s Hospital Colorectal database11. The database has been prospectively maintained since 2001, and includes data on 3,703 patients. Approximately 700 fields are completed for each patient to the highest possible degree by a dedicated colorectal data-manager, using patient charts and records. Fields include patient demographics, histology, surgery, chemotherapy, radiotherapy, and follow up. Historical patient histology predating 2001, patients referred for multidisciplinary discussion but who had their primary care elsewhere, and patients referred from other hospital to non-surgical services constitute a significant portion of the entries contained in the database.

To isolate the desired cohort of patients the database was queried by year, colorectal cancer diagnosis, operating hospital and operation type. Patients who underwent colorectal resection at St. James’s Hospital between December 31st, 2001 and January 1st, 2013 were selected for inclusion. Colorectal resections performed included right hemicolectomy, left hemicolectomy, sigmoidectomy, subtotal colectomy, total abdominal colectomy, transverse colectomy, proctocolectomy, panproctocolectomy, anterior resection, abdominoperineal resection, or Hartman’s procedure. At the time of analysis, data for 2013-2015 had not yet been validated and was hence excluded from this study. Age at registration, date of operation, date of death, date of diagnosis, TMN staging, metastatic status, level of urgency, tumour site, synchronous tumours, local complications, intent of surgery, surgical complications, cause of death, and ACPGBI and CR-POSSUM % mortality were extracted from the database. Nine hundred and eighty-seven entries were initially identified. In this group, there were 28 duplicate patient entries due to the presence of synchronous tumours at time of diagnosis. These repeats were removed resulting in a cohort of 959 unique patients for analysis. Three hundred and sixty-five of these patients underwent resection for rectal cancers, the remainder had colonic tumours. The overall patient population demographics and characteristics were tabulated and examined.

Date of death and date of operation were compared for all 959 patients. Patients who died within 30 days of their operation were considered surgical mortalities. The rate of surgical mortality was calculated for each year and compared across the 11-year period. The population demographics of the surgical mortality subgroup were tabulated and examined. Statistical analysis was carried out using R version 3.2.312, and GraphPad Prism 6 for Windows13. Linear regression analysis was used to evaluate trends in mortality across the time period. G*Power14 was used to estimate the sample size required for a prospective randomised control trial. 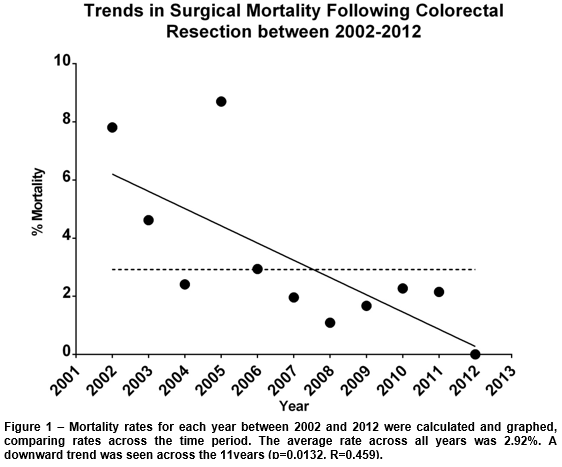 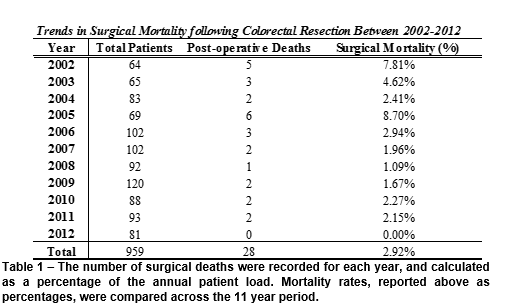 The average CR-POSSUM and ACPBGI percentage mortality were higher in the surgical mortality group (26.02% and 17.96%) than in the total population (7.7% and 5.4%)(Table 2), and all but one surgical mortality patient had one or more recorded post-operative complications. The most common post-operative complications were sepsis (10/28), organ failure (9/28), myocardial infarction (4/28), haemorrhage (2/28), deep vein thrombosis (2/28) and anastomotic leak (2/28). 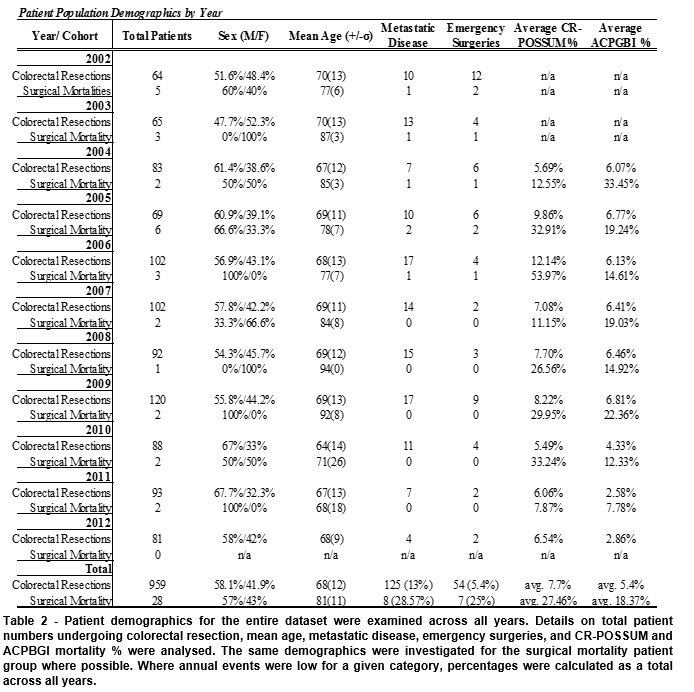 Discussion
These downward trends in surgical mortality following colorectal resection demonstrate a statistically and clinically significant improvement in operative mortality between 2002 and 2012. Multiple factors may be hypothesised to be behind this improvement. These include the advent of specialist colorectal surgeons, improvement in cancer staging, intensive care medicine and a team based care, whereby all patients are looked after by more than one consultant colorectal surgeon. Any or all of these factors may have contributed, though it is impossible to establish causality in a retrospective study of this nature. However, the magnitude of the improvements seen should not be overlooked. They are clinically significant and are of the same order as the population survival gain achieved by giving node negative patients adjuvant chemotherapy15. A prospective randomised controlled trial to look at such changes in mortality would require at least 400 patients to be adequately powered and is unlikely to ever be undertaken.

Of note, resection for rectal cancer accounted for 38.1% of the overall caseload, but just 20.3% of the surgical mortalities. Of particular interest, the composition of the overall caseload changed after 2007. Prior to 2007, rectal cancer accounted for 35.5% (28.1-43.4%) of all cases, and 40.2% (29.4-48.2%) thereafter. In the same timeframe, perioperative mortality following rectal resection decreased by 4.8-fold from 4.77%, to 0.98% following a similar downwards trend (R2=0.49, p=0.036) to that seen for colorectal resection as a whole. Across this time, the average number of colorectal resections carried out in the unit increased from 76.6 (64-102) to 96 (81-120), a 25% increase. It is worth noting that prior to 2007, 8.4% of the all surgeries performed were classified as emergencies, when compared to just 3.8% thereafter. There was also a reduction in surgical mortality for this subgroup, falling from 21% (7/32) to 0% (0/22). The significant decreases in the number of emergency surgeries carried out may be attributable to the increased use of colonic stenting used both as a bridge to surgery, or as an alterative to emergency palliative operations for colonic obstruction in incurable disease. We have have published our favourable results of colonic stenting elsewhere23. Though the data is promising, the scarcity of emergency surgeries in the latter years makes it difficult to comment with confidence on mortality trends within this group as a subpopulation.

This dataset has captured a time period which encompasses major alterations in the delivery of care for colorectal cancer. It has highlighted one of the positive effects that has come about as a result. The Irish healthcare system has continued to develop the manner in which colorectal cancer is approached. Most recently, in 2014 the National BowelScreen program was introduced. This has the potential to greatly alter the population dynamics of patients undergoing colorectal resection, and may have a knock-on effect on key performance indicators for resection. It is pertinent that analysis into patient demographics and surgical mortality post implementation of this screening program occurs in the coming years. Colon cancer was not spefically centralised under the national cancer control programe yet screen detected colon cancer can only be operated on in one of the eight cancer centres. With emergency surgery and advanced age being the highest risks of surgical mortality it seems anomalous that the lowest risk screen detected patients can only be operated on in a cancer centre whilst the elderly high risk emergency presentation can be operated on in any of our acute or private hospitals. We suggest that an Irish national audit of colorectal cancer mortality is urgently needed to ascertain if these improvements in surgical mortality are seen nationally and if not seen nationally to ascertain why not.

Conflict of Interest
There are no conflicts of interest.