ViEWS from the prehospital perspective: a comparison with a prehospital score to triage categorisation in the emergency department

This aim of this observational study is to investigate how the recently introduced National Early Warning Score (ViEWS) applied in the prehospital setting (Ph-ViEWS) compares with the Manchester Triage System (MTS) used in most Emergency Departments (ED) in Ireland. 386 patients fitted the inclusion criteria of which 272 (69 %) had a complete set of values. Of 272 MTS 1&2 patients only 114 (42%) had a Ph-ViEWS ≥7. This study found that a substantial number of patients deemed urgent at the time of triage do not have elevated Ph-ViEWS.

The VitalPAC™ Early Warning Score (ViEWS)1 has been adopted as the National Early Warning Score in all Irish acute hospitals. To date ViEWS has been validated on adult medical (non-trauma) patients in wards and Emergency Departments (ED), but not in prehospital care2-5. Recently Ebrahimian et al studied Early Warning Scores (EWS) for non-traumatic patients in Emergency Medical Service6. To the best of the authors’ knowledge EWS have not previously been compared with priority assessment tools used in ED triage. In most UK and Irish EDs patients are triaged on arrival using the Manchester Triage System (MTS)7. The MTS relies on vital signs but with the addition of reported pain as a central tenet. A patient presenting with normal vital signs and severe discomfort could by allocated a Category 2. The aim of this observational study is to investigate how prehospital applied ViEWS (Ph-ViEWS) compares with MTS. It is hypothesised that most patients triaged with a MTS of 1 or 2 would have a high ViEWS score of ≥7.

Ethical approval was granted by the University Hospital Limerick (UHL) Scientific Research Ethics Committee. UHL is a 512 bed, major regional referral hospital for the Mid-West region of Ireland, with 60,000 attendances to the ED annually. The Limerick city National Ambulance Service (NAS) responds to circa 13,000 calls annually, about 50% of which are 999 emergency calls. A retrospective chart review was undertaken on a cohort of high acuity (MTS1&2) non-traumatic adult patients. Patients aged >14 years, transported by NAS were included in this study. Patients in cardio-respiratory arrest, those with mental health or palliative care needs, and with missing data were excluded. For the six month period surveyed, 386 fitted the inclusion criteria, with 272 (69 %) having a complete set of values to enable calculation of the score. The Ph-ViEWS score was retrospectively calculated using scanned anonymous relevant reports copies using Microsoft® Office Excel 2003. SPSS for Windows Version 20 was used to carry out the statistical analysis. The distribution of Ph-ViEWS was tested for normality and described graphically and numerically for all patients by MTS category and by whether or not the patient died within 24 hours. The proportion of patients with a Ph-ViEWS ≥ 7 was compared across categories using a Z test for proportions or Fisher’s exact test. A 5% level of significance was used for all hypothesis tests. 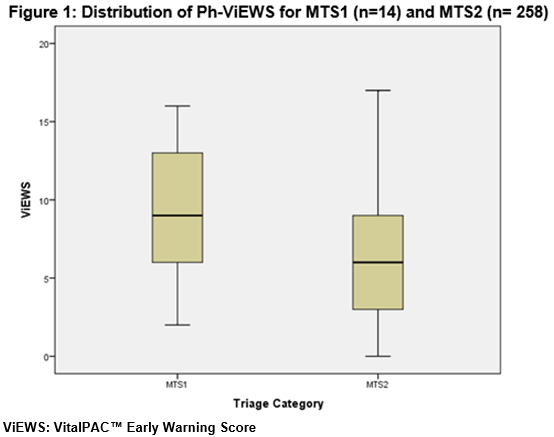 In this study, it was found that approximately a third of patients with MTS 1 or 2 in the ED had a Ph-ViEWS below 7. However, it should be noted that all of the patients that died within 24 hours, had presented with a score ≥ 6. Prytherch et al proposed than ViEWS has been validated as a predictor of mortality at 24 hours after stabilisation and admission to a ward, not a predictor of a need for resuscitative care2. The principal limitation of this pilot study is its sample size. Also the study solely focused on high acuity medical patients. A large scale multi-centre study would be required to confirm the findings reported here. In conclusion, ViEWS and MTS are two different systems and are not interchangeable. Practitioners shouldn’t rely on a single Ph-ViEWS measurement to influence their treatment decisions, since it has not been validated for those specific areas of care. More research needs to be undertaken to validate the Ph-ViEWS.

The authors have reported no conflict of interest.