Methods:
All TKA patients during a calendar year had their 25-hydroxyvitamin-D3 (25-OH-D3) assay levels assessed pre and post operatively. A control group comprising of patients admitted for 1-day general medical assessment was recruited. Usage of supplements containing Vitamin D was recorded for both groups.

Results:
There was no evidence of a difference in Vitamin D levels between the TKA group and the control group (p=0.19). Just over 40% of patients had insufficient levels of vitamin D in the TKA group (50 nmol/L cut off). There was a statistically significant drop in vitamin D levels post operatively (p=0.0001). Supplements were protective against insufficiency post operatively (p=0.0005, OR 6.0985).

Discussion:
This study documents a high prevalence of vitamin D insufficiency in patients undergoing TKA surgery. Our results suggest a consumption of 25-OH-D3 as part of the surgical insult.

Introduction:
A significant proportion of the world’s population have low vitamin D levels1. Concern has been raised of a pandemic of vitamin D insufficiency in Europe2. 40.4% of Europeans and 40.1% of the Irish population3 have levels below 50nmol/L – a level considered to be inadequate for bone health by the institute of medicine 4. Vitamin D is essential for bone health and in recent times negative associations have been found between low levels of vitamin D and many chronic diseases5–8. Studies evaluating patients presenting for knee, hip or shoulder arthroplasty using the same cut off level (<50nmol/L) have reported prevalence’s of vitamin D insufficiency ranging from 30% to 82%9,10

Low levels of vitamin D have been associated with radiographic progression of knee osteoarthritis11 and some studies have reported lower levels of vitamin D in younger patients with knee osteoarthritis when compared to a control group12. Various studies evaluating TKA and THA patients have found associations between vitamin D levels and poorer pre operative functional scores 13, post operative functional scores9, length of stay14 and pain intensity15. Low levels of vitamin D have also been found in those with periprosthetic joint infection and prosthetic loosening16. The purpose of this study was to quantify vitamin D levels in patients undergoing TKA in the west of Ireland and compare this to a control group of patients without osteoarthritis. The study will evaluate the affect of TKA surgery on vitamin D levels whilst examining factors such as supplementation, age and gender.

Methods
A prospective case controlled study was designed in a single surgeon practice in the west of Ireland. The hospital ethics board granted approval. All patients undergoing primary TKA over the course of a calendar year were consented for inclusion in the study. The lead author performed all surgeries. Patients had bloods taken pre-operatively and on day 2 post-operatively by nursing staff. Serum plasma levels of 25-OH-D3 were analysed in the hospital biochemistry laboratory. Results were released to patients on a phased basis following the 6-week post-operative review with the operating surgeon. No active intervention was implemented in the pre-operative or immediate post-operative period. A group of day case patients presenting for general medical assessment in the same institution had their 25-OH-D3 levels checked and were consented for inclusion in the study as a control group. These patients were also recruited over the course of a calendar year. Patients with a history of osteoarthritis were excluded.

Results were recorded quantitatively and categorized qualitatively into 2 groups: normal and insufficient. The literature on hypovitaminosis D is conflicted regarding the cut off for insufficiency. 50nmol/L (20ng/ml)1718 is considered the cut off by the Institute of Medicine and 75nmol/L (30ng/ml)19 is the cut off published by the International Osteoporosis Foundation. We thus categorised patients using both cut offs and completed our analysis using both groupings. Usage of dietary supplements containing vitamin D was recorded for both subject groups. Demographic data including age and sex was recorded also.

Statistical analysis was carried out using statistical software packages SPSS version 22 and Minitab. Summary statistics were calculated and a general linear model (GLM) analysis was conducted for the response (Vitamin D Level) as a function of group (control versus TKA), gender, vitamin D supplement usage and age. The primary objective of the GLM analysis was to test if there is statistical evidence of a difference between control and TKA patients with respect to the Vitamin D level after adjusting for the effects of Group, Gender, Vitamin D and Age. Comparisons between TKA and control groups were made using the pre operative vitamin D levels only. A repeated measures analysis was conducted modelling pre-operative and post-operative vitamin D levels in the TKA group as a function of gender, vitamin D supplement usage and age. P values of less than 0.05 were considered significant.

Demographics:
One hundred and sixty-four patients were included in the study. There were 79 subjects in the TKA group, of whom 31 were male and 48 were female. In the control group of 85 patients, 44 were male and 41 were female. The mean age was 68.2 years in the TKA group and 61.3 years in the control group. One patient was excluded from the control group due to an unrecorded laboratory result and another was excluded from the treatment group, as supplement usage was not recorded. Thus 162 patients were available for analysis. 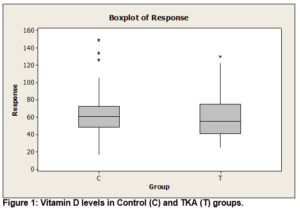 Vitamin D Status:
There was no evidence of difference in Vitamin D levels between the control group and the TKR group after adjusting for age, gender and Vitamin D supplement usage (p=0.193) [see fig. 1]. 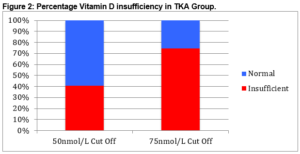 Post Operative Results:
A statistically significant reduction was found between pre-operative and post-operative vitamin D levels after adjusting for age, gender and vitamin D supplement usage (p=0.0001). There was a mean overall reduction of 12.5 +/- 9.43 nmol/L across the group. Sixty-two percent (n=49) of TKA patients had insufficient vitamin D levels post operatively using the 50 nmol/L cut off. Supplement users were more likely to have sufficient vitamin D levels post operatively (one sided p=0.0005, OR=6.0985). Just over 92% of patients fell below the 75 nmol/L cut off post operatively. No significant effect of supplementation was found using this categorisation (p=0.566).

Discussion:
There was a high prevalence of Vitamin D insufficiency evident in patients scheduled for TKA, with 40.5% of the population having levels less than 50nmol/L. There was no difference between the TKA group and our control population. These levels are broadly in line with population based data previously published showing 40.1% of the Irish population have insufficient levels of vitamin D3. The prevalence of 74.5% vitamin D insufficiency using the higher cut off of 75nmol/L was also similar to population-based data on an Irish population. This data is concerning and lends support to recently published data fearing a pandemic of vitamin D insufficiency in Europe2. This may be having a significant affect on the health of the population in general as vitamin D has been broadly cited as a factor in a large variety of conditions including cardiac disease5, multiple sclerosis6, diabetes7, as well as colorectal 8 and breast cancer20.

Despite there being no difference in the levels of insufficiency between arthritic and non-arthritic groups, the impact of vitamin D insufficiency cannot be discounted in terms of its effect on bone health and metabolism, and therefore its potential effect on surgical outcome. 17.5% of the population of Ireland3 takes supplements containing vitamin D and we saw a large proportion (40.5%) of our TKA population take vitamin D supplements. This likely reflects public concern and recent publicity regarding vitamin D insufficiency and bone health. Vitamin D supplementation may not have been prescribed directly by the operating surgeon however; therefore there was no standardisation in the type of supplementation being taken by the patients in the study.

The reduction seen in vitamin D levels recorded post operatively confirms and quantifies the reduction in serum plasma 25-OH-D3 levels associated with the TKA surgery process. As has been suggested by other authors previously, this may indicate that vitamin D insufficiency is a consequence rather than a cause of inflammatory disease21. Longitudinal studies of vitamin D levels following arthroplasty surgery indicate that vitamin D levels remain low despite a return to normal levels of C-reactive protein22. Henrikson et al23 have shown that the reduction in vitamin D in the weeks following surgery corresponds to an increase in pro inflammatory cytokine levels (TNF-α, IFN-γ, IL-1β, GM-CSF and IL-6) from weeks 2-8 post operatively. There is a definitive inverse link between inflammation and vitamin D levels however increased bone turnover may also play a role. Reid et al22 showed that the reduction in vitamin D is rapid and given the half life of vitamin D stores (~ 3 weeks) increased bone turnover is unlikely to be the major factor, particularly in the acute phase.

There was a mean overall reduction of 12.5nmol/L in Vitamin D levels. In some situations in orthopaedics, particularly in trauma surgery, it is not possible to take a vitamin D level prior to the inflammatory process initiation and therefore this information may help physicians and surgeons interpret the vitamin D results in the clinical context. Further investigation is needed to ascertain if we can reliably treat vitamin D insufficiency based on post-operative or post fracture blood tests and guidelines on how best to interpret these lowered vitamin D levels are awaited. It has been suggested that overtreatment of vitamin D insufficiency based on these post-operative results may risk toxicity. Conversely, it may be that if increased demand on vitamin D stores is confirmed, there may be a therapeutic role for high dose supplementation.

Supplementation had a significant affect in our exploratory statistical analysis with supplement users 6 times more likely to have a vitamin D level above 50 nmol/L post operatively. This is a potential area for further research to ascertain if attenuation of this reduction in Vitamin D using a standardised supplementation regime has an affect on the outcome. Variability in the categorisation of vitamin D levels amongst the scientific community continues. The conflicting definitions of the institute of medicine and the international osteoporosis foundation may reflect their differing areas of interest. The institute of medicines definition is based on the minimum level required to suppress PTH secretion. However it is a mean level, with large variability across the population. The international osteoporosis foundation have based their cut off level on fracture prevention and emerging evidence that levels between 70 and 80 nmol/L may be protective against fracture 24. Objectively looking at the evidence, it would appear that in an orthopaedic population, and in particular those at risk of osteoporosis, a treatment target of 75nmol/L is wise.

This study represents an important contribution to the literature surrounding vitamin D and arthroplasty. We found a high proportion of patients presenting for total knee arthroplasty have insufficient levels of vitamin D and that vitamin D levels are lowered as part of the surgical process. Patients presenting for TKA are more likely to be on Vitamin D supplements than the general population, however both group had similar levels of insufficiency.

Conflict of Interest:
The authors of this paper have no conflict of interest, financial or otherwise, pertaining to this research